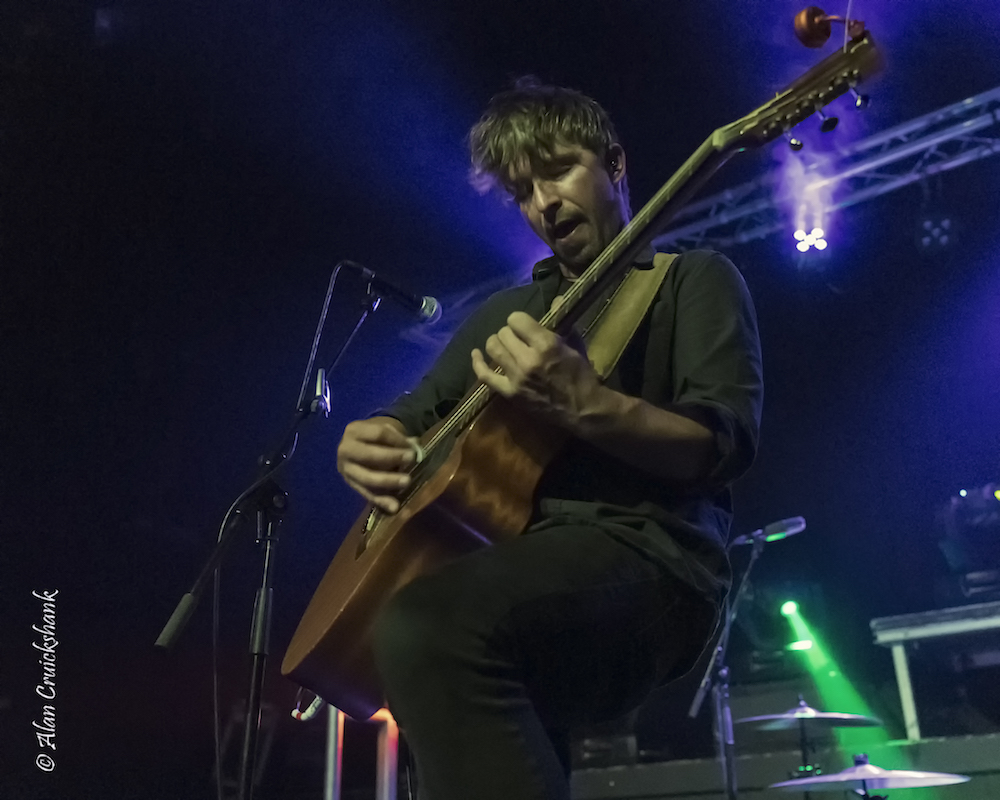 Last Friday saw the Ironworks filled with local talent for the Netsounds Belladrum Fringe event. For as little as £5, the audience could enjoy (and they certainly did enjoy) the music of Sam Cain, The Chosen Lonely, Carma, Park Circus and Gordon James and the Power.

We (or should I say, my mum) had wrongly assumed that the gig would not start right on 7.30pm, meaning we had to rush in at 7.45pm after hearing the distinct voice of Sam Cain from the front door. I was instantly impressed with his outfit choice; an original Autumn Sun top. He must be just as supportive of the local music scene as the rest of the audience, I thought to myself.

Despite my severe lack of knowledge about guitars, I noticed that Sam’s impressive skills on his own guitar made the performance even more engaging. His immense amount of talent was shown throughout his half an hour slot (or just what I saw of the half an hour slot…), but what stood out to me was the cover of ‘You Know That I’m No Good’ by Amy Winehouse. Sam complimented the already incredible song with his own singer-songwriter style in order to have his audience captivated and singing along.

Speaking of singing along, by the second chorus of Sam’s original song ‘Dancing Shoes’, I knew all the words and was ready to put my own dancing shoes on. Sam held up well to the pressure of opening up the Ironworks stage on his own but left a very lively audience to the rest of the bands. I’d call that a success.

Next up was The Chosen Lonely (otherwise known as Steven Barclay), who had chosen to go lonely after being lead singer of the successful local band ‘Ralia’. He began the set with his electric guitar in hand and laptop by his side, but soon stripped down to using only his acoustic. I admired his ability to tell a story in the new songs he’d written since leaving the band, but also appreciated hearing a taster of the older stuff. He finished by again making use of a pre-recorded backing track and it was definitely a hit with the audience.

What I also noticed about The Chosen Lonely was the swarm of photographers who took a particular interest to him. Turns out he wasn’t so lonely on stage with the amount of cameras up there with him.

Then it was local duo Carma, who are known for their laid back sound with piano, ukulele and vocals. As I am pretty close to the band (honestly, you’d think we’re family), I have heard all their songs live too many times to count. Although they played all the same songs on Friday, they sounded entirely different and even (dare I say it) better.

This was all thanks to the new additions for the night; Blair and John from Gordon James and the Power (the girls from Carma did in fact apologise to Gordon James for ‘stealing his band’). The drums and bass turned the extremely chilled out songs such as ‘Little Humming Bird’ into funky tunes that you wanted to dance along to.

My mum (who was wearing her very own Carma t-shirt) and I had previously begged the band to do a cover that we could all sing-along to. Unfortunately, this did not happen, but what did happen was an easy listening range of crafted originals that impressed the audience more than a cover ever could.

Suddenly the audience increased, I watched the metal barrier at the front finally getting some attention. It was the new indie rock band called Park Circus who had hit the Inverness music scene only a couple of months ago. It was clear that the band knew how to start a set; the volume went up a notch and the fans crowded around ready for the music to begin. They also knew how to continue a set as shown with their cover of ‘I Bet You Look Good On the Dancefloor’ by the Arctic Monkeys. It was that performance that had the audience pumped for the rest of the night.

I couldn’t help but pick up on the lead singer saying ‘Cheers,’ after nearly every song he performed. The minimal amount of conversation showed a sense of professionalism in that it was more about the music rather than small talk. So ‘cheers’ for a great set Park Circus!

This was my first time watching Moray based band Gordon James and the Power live (if you don’t count seeing the majority of them perform with Carma a couple of sets earlier). After hearing so many good things about the band, I was excited to see what it was all about for myself. I loved how obvious it was that they were enjoying being on stage playing their original songs. Watching how happy John was on the bass made the whole audience smile along with him and Gordon James had the best guitar dancing I’ve ever had the pleasure of witnessing. Gordon described Blair the drummer as the hardest worker, and in my mum’s words ‘he certainly worked those drums.’