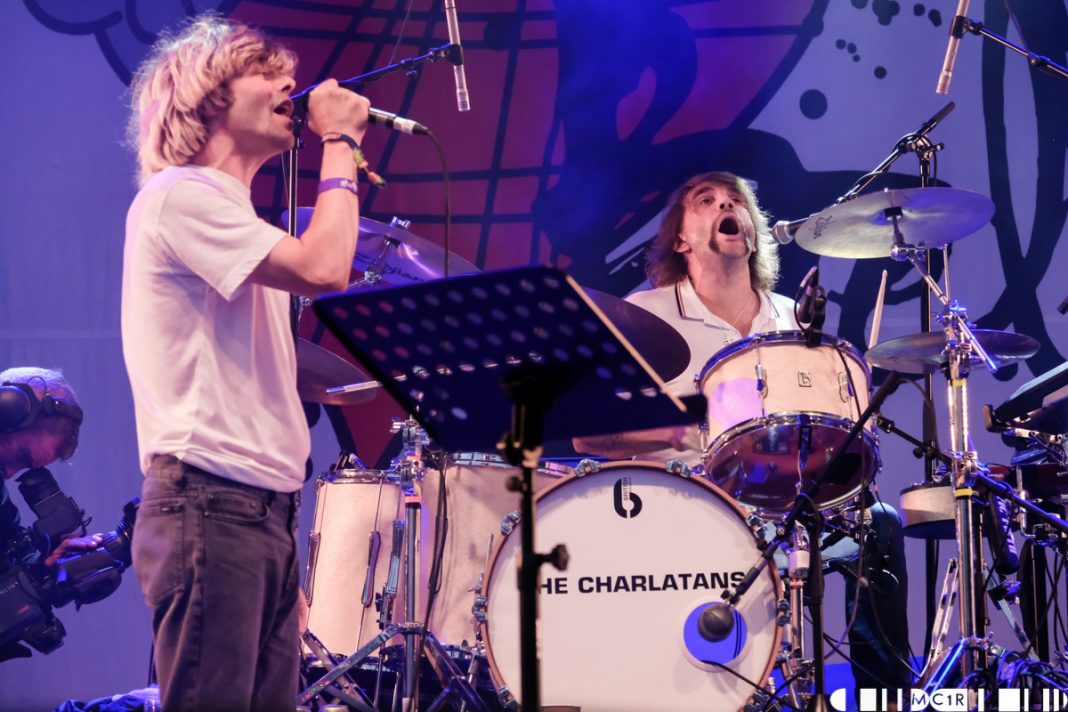 Whoever books the bands for the Hothouse stage clearly has a perverse sense of humour. Opener Seed of Sorrow are not known for the kind of music to ease you gently into the day, instead a wall of noise washes out of the tent and down towards the masses camped out in general camping next door. Judging by the groans emanating from some of the more hungover members of that community Seed of Sorrow were very much playing to their name. Playing a ferocious set of thrash metal they’re very similar to the likes of Lamb of God with a definite nod to their earlier contemporaries in Slayer. A most delightful racket.

Over on the Grassroots stage the now ubiquitous Dougie Burns makes an appearance and this is a more genteel entry to Bella listening pleasures for those who have just arrived on site. That said, Dougie doesn’t do low tempo and it wouldn’t do for him to be too genteel either. Edgar Road follow on and this is a band whose reputation precedes them. They’ve been building on a solid run of live shows and are ticking all the rights boxes when it comes to creating anthemic rock tunes to sing along too. Sitting neatly alongside the likes of Simple Minds it’s the kind of music you can see making the move to the Garden Stage in years to come. Noble Jacks get the Grassroots back on a trad footing and the Surrey-based band are the band to do it. Citing The Levellers and Mumford & Sons as influences the tent which starts off near empty at the start of their set, steadily fills up as people are drawn to the up-tempo tunes coming from the tent.

A quick drop into the Seedlings, which is perhaps now unwisely situated very close the larger Hothouse stage, for the Dazed Digital Age. I don’t notice any noise bleeding in from their next door neighbours but that could be because the band aren’t shy of cranking up the volume themselves. Like the bastard offspring of Talking Heads, Depeche Mode and Devo, the fledgling band (this is only their fourth live outing) are an interesting prospect and Gogo’s somewhat eccentric personality gives additional edge to the live performance. I can’t quite figure out whether they’re trying too hard, but on first impressions (bearing in mind they’ve not been on the go all that long) they’ve got a bright future.

On to the Hothouse Stage and Pumarosa confound any attempts to pin them down to any particular genre as they flirt with indie space rock before flitting to full on Drum ‘n’ Bass (‘I bet you weren’t expecting that’), stoner rock and dreamy pop music. The performance is near flawless with front-woman Isabel cavorting and spinning on stage apparently lost in the music. It would be waaaay too easy to make Kate Bush comparisons, so I won’t, even though I want to, and it would be a little unfair seeing as this performance is one of the highlights, if not the highlight of the weekend so far. It’s an absorbing and compelling half hour of music and I’d recommend going and checking out their album ‘The Witch’ if you didn’t manage to get down and see them. I suspect those what were there have long since downloaded it.

I caught Lucy Spraggan purely by chance over by the Verb Garden talking to Press and Journal’s Susan Welsh shortly before her set on the Garden Stage. It would be extremely unjust to dismiss Spraggan as an X-Factor drop-out and you would do so at your peril. An extremely articulate interviewee she’s frank about her struggles with her own mental health and how she’s managed to deal with that. Meeting her wife in 2014, getting a dog and moving closer to home nearer ‘real people’ all helped change her life along with getting away from the slightly more intense surroundings of London and away from some of those stressors.

With the Frightened Rabbit tribute later on this evening it’s a timely reminder of the importance of looking after our own mental health. On to the live show and the garden stage is rammed in anticipation of her set. Belladrum have a habit of adopting artists as their own (Seasick Steve as an example) and she’s clearly delighted at the reception she receives.’Dinner Time’ is  written in response to her new role as a foster carer with her wife and realisation that her mum might actually have been right after all. ‘Tea and Toast’ is about an elderly couple (“the lady collapsed in the street and was unconscious. And the look on the husbands face was like he’d never lost her before and he’d just lost her then…”) goes down a storm while ‘Last Night (Beer Fear)’ is a wry look at her experiences on a night out. There’s a significant spark of wit and humanity to Spraggan’s work and you can see why she’s such a popular draw down on the Garden Stage.

The Charlatans have a slightly shaky start with a very weak sounding ‘Totally Eclipsing’ but they quickly get back on form and fire out the hits in rapid succession. ‘North Country Boy’, ‘One to Another’ and ‘The Only One I know’ still sound as fresh as the day they were written while Tim Burgess with his masterpiece of a bleached mop-top writhes and grooves on stage with a huge grin plastered across his face. It’s easy to forget these guys were pre-Brit Pop and started off back in the Madchester days alongside the likes of the Happy Mondays.

Unlike some of their contemporaries though, they’ve lasted the distance have continued to write and perform quality music. The surprise of the evening is when Tim introduces Grant Hutchison and Billy Kennedy on to the stage for a version of Frightened Rabbit’s ‘Head Rolls Off’, it’s a touching tribute to Scott and a credit to the big hearts of The Charlatans for pulling it off. Photos of the set are here.

As I headed back over towards the Hothouse Stage I had a chance to catch
the Van-T’s incendiary set over on The Seedlings Stage. The quartet from Glasgow are a powerhouse of noise and attitude and I was glad to finally get a chance to see what the fuss was about. They’re yet another band in the current crop of young Scottish bands garnering a solid reputation and the recognition is well-deserved.

Yonaka on the Hothouse Stage make a similar racket to the Van-T’s and frontwoman Theresa Jarvis is a commanding presence on stage while they deliver a very polished half hour of melodic punk. This was very much a case of ‘I have a spare hour, what’ll I go see?’ and I’m glad to have chanced upon this lot. The single ‘Waves’ was released on Friday and gets an airing at Belladrum. Judging by the reception I wasn’t the only one to appreciate what these guys were doing.

The tribute to Scott Hutchison is my last stop for the evening. As most will probably know, Scott completed suicide in May of this year while Frightened Rabbit were billed to play ‘The Midnight Organ Fight’ in its entirety this Friday. It was decided that rather than replace the band with another act that they would play a recording of the recording album in full and use a big screen as the backdrop to play montages and live footage of the band. It works beautifully too.

Rabbit in the Garden

A large proportion is live recordings of songs from the album at the Garden Stage in Belladrum and the present day crowd singing along with the crowd on the recording gives me goosebumps. We were told that we should enjoy it, that this is a celebration of Scott’s life, and the spirit of that request is embraced. It is undeniably tinged with sadness and there are periods where many of us in the tent need to take a second (or ten) to take a deep breath. However the overwhelming feeling is of appreciation for a man who had an immense capacity to channel the rawest of emotion into some truly incredible music. This was a chance to celebrate Scott and Frightened Rabbit’s music and no-one there shied away from that task. An emotional way to end the day but a heart-warming one at the same time.

Looking for another perspective of Belladrum?

Check out this review of Friday, including Paloma Faith and The LaFontaines