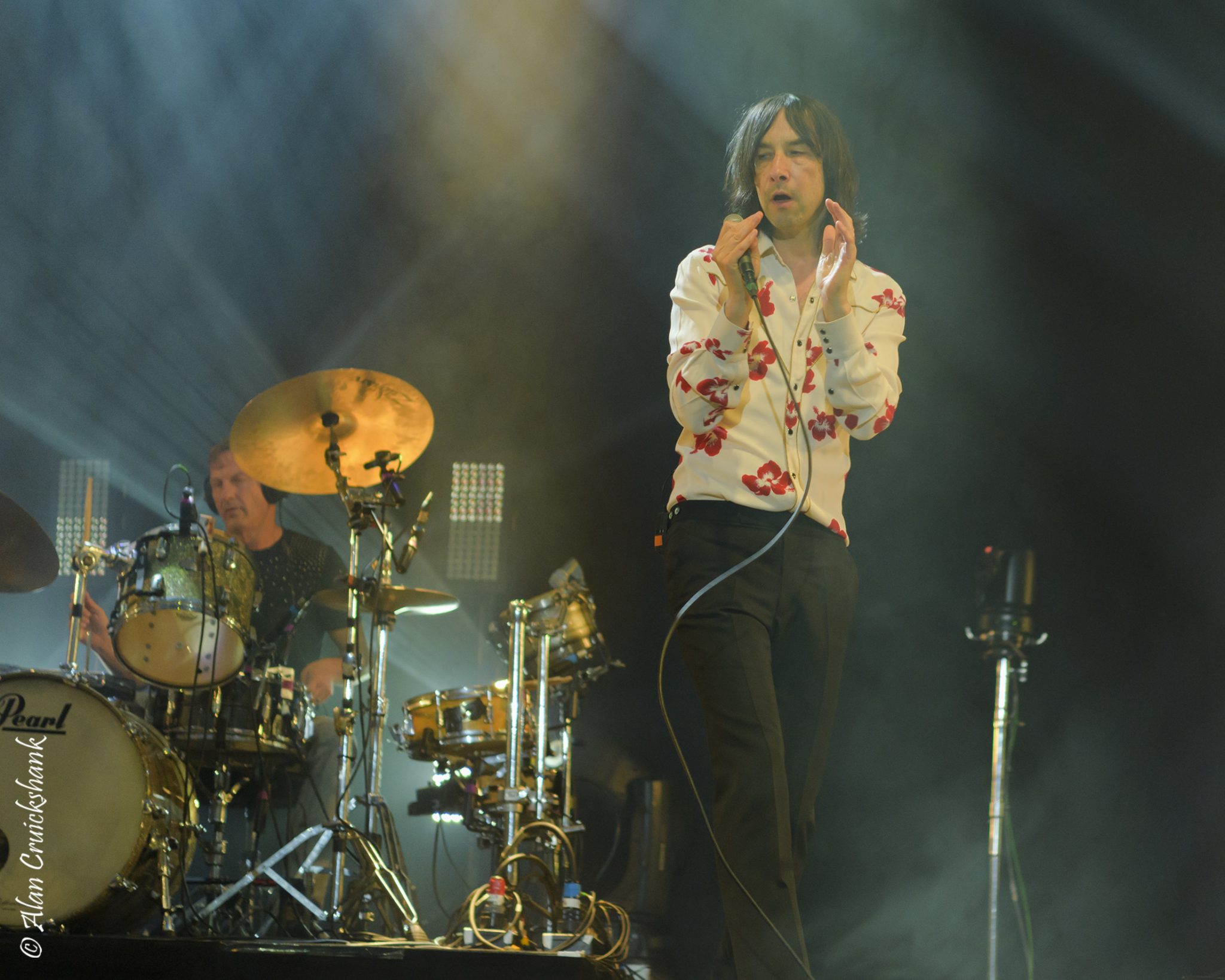 Saturday at Belladrum saw the highly thought of Sea Girls take to the Hothouse Stage. Their guitar driven set is accessible and well polished and very much for the fans of Bastille, The 1975 and especially on the vocal Catfish & the Bottlemen. They have a strong stage presence and with a well timed foray into the crowd by singer Henry Camamile he let the crowd surround him while he sung ‘Adored’. Songs such as ‘Too Much Fun’ and ‘Call Me Out’ are well up there with the aforementioned acts’ catalogue but my only question is whether there is space for another band who align so closely. If there is it should be Sea Girls.

The Hothouse though didn’t do Siobhan Wilson any favours as the sound from both the Seedlings stage and the Co-op area was a distraction throughout her set. At times it drowned out the intricacies of her supporting musicians especially that of the cellist. But what you could hear in the set was somewhat quirky with a light touch, not dissimilar to Rachel Sermanni, an engaging performance if it were not for the peripheral sound leaking in.

Early in the set there was a Tarantinoesque soundtrack mood to ‘Dear God’ and later as Siobhan moved to the keys there was a greater intensity and power. The outside noise was just too distracting for me but with the subtleness of Siobhan’s work it is difficult to place her and her fellow musicians in a spot at such a festival where they can be fully appreciated.

The phenomenon that is Gerry Cinnamon took to the Garden Stage to his huge gathering of followers. To see Gerry on stage, with a smile as wide as the arena, you can tell that he finds it hard to take it all in but equally is living that dream. His style would appear at home busking on Sauchiehall Street, but it is that down to earth charm and songs that you can connect with are what has taken Gerry to this level, and it’s Gerry that has taken himself there and not the promotion of a major label.

The crowd know the words to every song, probably even before Gerry has written the words himself. Connectable, relatable and the people’s champion against the commercial world of the big labels, long may Gerry prosper. Even once you had left the arena fans, and new fans, were still singing ‘She’s a Belter’ in the food queues half an hour later. (Check out our photos of the gig here.)

You Me at Six have headliner written all over them and it is to Belladrum’s credit that the calibre of such an act has to play second fiddle. With a blistering set You Me At Six know how to work an audience. There was though an interlude early in the set when someone decided to unplug the wrong socket to recharge their iphone but thankfully the drop in power was brief. As well as unleashing ‘Underdog’, ‘Reckless’ with its shirt waving and ‘Bite My Tongue’, they were well up for a bit of banter with the audience especially asking them if they wanted Croatia to beat England at the World Cup.

They did have an answer to the overwhelming cheers but as well as mentioning Scottish heritage also bowed to our superior drinking ability, which I believe is something we are meant to be proud of. They also mentioned that they were playing Barrowlands in November and I’m sure there will be a few converts now disappointed to be missing out on those sold out shows. They did, however strongly hint that they will be playing TRNSMT next year.

All good things must come to an end and to bring it to an end was the Bobby Gillespie led Primal Scream. There were no fancy backdrops or stage decoration, just a hell of a lot of lighting to accompany the performance. Bobby is an enigmatic character who doesn’t give too much of himself away on stage but is still very much a performer who can connect by sheer presence. ‘Movin’ On Up’ opened it with a bang and from there the crowd were captivated.

It was slowly ramped up through ‘Kill All Hippies’ as those beats fed through the arena ‘you’ve got the money, I’ve got the soul’ on repeat, through ‘Higher Than the Sun’ of whom Bobby thought many were… ‘Swastika Eyes’ with ‘Loaded’ following kept the focus firm. Although surprisingly the sing along for ‘Come Together’ took a little prompting the scene was set as we raced towards 11 o’clock when the curtain comes down for another year. But with ‘Country Girl’ and festival ender ‘Rocks’ up their sleeves Bobby and co saw it through perfectly leaving it for the fireworks to draw 2018 to a close.

It’s all too easy to say ‘best Belladrum yet’, which I probably have said in the past, but Belladrum has reached such a level that it is a consistently strong festival that both surprises and delights in equal measures. It also never disappoints. That is the key to what makes it a success, and why without question people always come back. Within a week it will be just a field again but already thoughts will be turning to next August.

WHAT HAVE YOU MISSED? All our other Belladrum 2018 interviews, reviews and photographs can be found here. Please also check out our friends at MNPR for their perspective on Belladrum 2018.

You Me at Six had an awesome set, check out the photos here