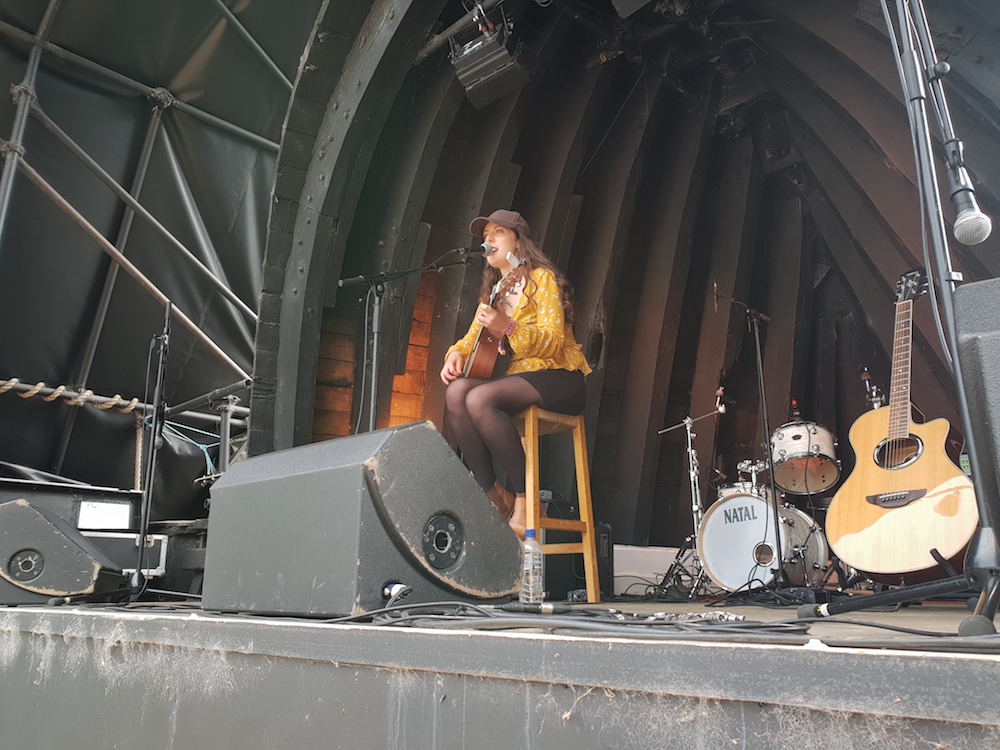 Up and fresh for Friday shenanigans at Belladrum. Walking through the campsite the revellers in general camping were slowly emerging with tins of Tennents with a relatively fresh look. 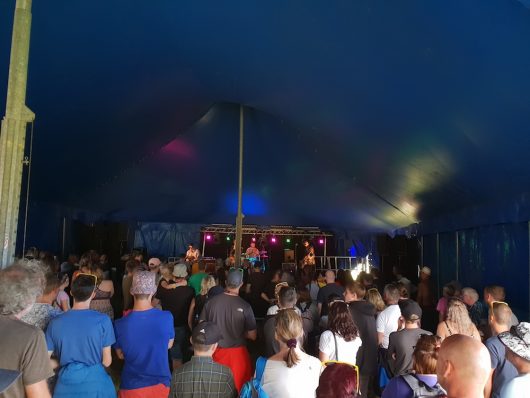 First call this morning is to head to The Seedlings Stage to catch up with IGigs competition winners. The tent filled up very quickly for The Roov and they burst onto stage with a very 90’s Indie look and a sound to match.

Throughout the set you get a 70’s and 80’s funky influence which wakens the crowd (and me) from their morning slumber. I lcaught the band last year at the Tooth and Claw , but they have come along way since then with a tight and professional sound with track ‘Stuck On Me’ and set-end “Get The Fever” particularly going down well Finished up with Get the Fever. The Roov may have a retro feel, but they smashed the early morning slot.

Managed to catch up with the band afterward the gig to ask them a few questions;

Being competition winners and then getting a packed stage, how does that feel lads?

“Amazing, don think it could have been any better! We couldn’t have played any better as well! We had a real good time considering it was only announced a week ago and at half eleven in the morning can’t expect everyone to be raring to go but everyone was up for it! It was defiantly the best we have ever played!”

This was you first Bella?

“Yes its or first Belladrum and it’s our first ever festival! Defiantly up for more! Hopefully you will be here interviewing us this time next year as well!”

What have you got lined up to see this weekend your selves?

“Really have to see Primal Scream, Professor Green he is awesome! The Sea Girls they are a a really good indie band, and the band from Glasgow called The Dunns which we are supporting them in October,  there has to also be The Charlatans.”

Since the last time I see you at the Tooth and Claw I have see a great improvement and have noticed a 70’s and 80’s feel. Where has this come from?

“Since we started our gigs in Inverness it’s snowballed from there! We have bee recording in Dundee we’ve also been listening to a lot more music 70s 80s kind of stuff!”

What have you got coming up next?

“We’re playing King Tuts next week, a new single commit out on the 17th of August called ‘Do You Want To Be Like Me’ with a video release. It’s available to down load on your usual platforms in the coming months there’s a lot more music to come”

By the time I made it across to the Free Range Folk Stage, The Medinas were in full swing with people sat about on hay bails lapping up the young lads tunes. Their cover of ‘Same Jeans’ brought a smile to my face, but their own composition ‘Daisy Chains’ showed  the bands great potential. (The track will feature in their forthcoming EP release).

Kelvin Ross sang a chilling song about the Clearances ‘Blood and Bone’, the song had that haunting tones to bring out the feel of the times. Kelvin’s songs are great stories that make  history come alive. With Kelvin sitting in the hull of the old boat you could imagine you would be away in an adventure over the sea with sailers hoisting the mast on the Trafalgar.

Sarah Gallagher’s first song was ‘Dumped in Paris’ which has sweet story and was followed by a cover of ‘Billie Jean’ which went down well with ever growing crowd. Her song ‘Tinder’ picks up the pace, a very honest song written about failed attempt at online dating. Sarah has a good song writing style over a variety of modern life problems! She has a touch of Lilly Allan but has a soft tone which is a pleasure to the ears. I was Lucky and managed an interview with Sarah!

Was this your first time at Belladrum and how did it feel?

It’s a nice crowd and sunny afternoon , it must be good to get a get nice audience?

“It’s lovely to have the support and  to have a big family to bribe to come to these gigs!”

Are you playing any where else this weekend?

“I am playing the Tomatin Bothy later but that’s it for me!”

Who have you see so far and who would you like to see?

I watched Kelvin Ross who played before loved his guitar, The Charlatans, Paloma Faith also Lional there a brilliant highland band and and catching talent I haven’t seen!

Do you have a way that people can look out for your music?

“I have an EP that I’m going to be working on over Christmas time I’m very excited about doing that!you can find me on my facebook page and instagram I really working my way up to creating my ep that I’m super proud of and I can go on a wee mini tour and stuf do the rock and roll musician thing fingers crossed.”

Bethany Wapper started her set with a cover of radioactive! She had the audience set to attention listening! From her EP ‘Moments’ which is about falling in love! battles is a song which is about the struggles of a friend having difficulty’s of mental health which she gave such a passion in the song which helps you to to understand the raw feeling this situation wold have given.  The more Bethany sings the more crowd she draws! She led us out with a cover of country roads where she had people singing along a lovely way to Finnish off her set! I also got a chat with Bethany!

Is this you first Belladrum set this weekend?

“Yes it’s my first gig ever at Bella and I’m playing tomorrow with my samba band Rhythm ways in the Venus flytrap stage we’re doing samba music and dancing and stuff, we player here last year just on the grass, this is my first gig doing solo!”

Did you enjoy it?

“One of my favourite gigs I have ever done I was so nervous I’m still shaking from it with adrenaline but actually loved it, I dident expect anyone to come, and I was like people came ok cool!! Amazing one of my best gigs ever.”

Who an what have you seen so far and who would you like to see?

“I only arrived today but I watched Amy Macdonald on tv last night! I want to see Tamzene, Carma, the highland voices choir I want to see so many people as much as I possibly can!”

I heard you talk about your EP is it out now?

Yes it is there is two out, one come out last year and my second called battles they are available on all formats, I did them for collage but I love doing it.

Rhona Macfarlane has a lovely harmony about her voice which makes her songs float up on the air drawing out to the crowd. She played her song Golden leaf from her album timelines At times it feels like the tones of first aid kit! And her guitar had the lighter sound of the likes of Newton Faulkner or Jose Gonzales with its rolling bass,  Got a real feeling of who Rona is when she sang a reminiscent song about her Brother.

Having a fair chunk of my day at the Free range stage it gave me the opportunity to speak to stage manager Bob Bull.

How do you feel your day has gone so far Bob?

“It’s gone fantastic I wouldn’t have expected it to go any other way really the wether helps as well. We’re not use to being hot and sticky at Belladrum but we defiantly are today.”

What has been you highlights so far today?

I wouldn’t highlight any particular artist cause one thing I really enjoy is hearing people that I’ve only may ever herd online and actually sing them face to face and hearing them play and almost without exception are better than I expect them to be! I think it’s been outstanding!

My next question was really do you have people you would recommend to come and see later tonight or tomorrow what names stand out?

At this point I wish I had a list on names in front of me, all I can say is that we have some unusual things eclectic things tomorrow things outside the norm like a band called Strumness that used to be a choir but the bought a ukulele each so I think that’s going to be interesting and fun and certainly a challenge for the sound guys tomorrow night and to finish off with Gordon James and the Power that people are getting quite excited about again, not our normal ceildh end to the evening on a Saturday but from past experience Friday is when we need the ceilidh band by Saturday night people are quite tired so something to bring them back up again!

Change of scene with a move to the grass roots stage  where Ryan McMullen is playing a cover of  “I Got Issues” rolled over the big tent with a sharp crisp vocal and the piano was equally to his vibrancy. His new song, ‘Johnny’s Story,’ really got the audience going, so too ‘Winter’s Coat’  an up-beat love song. He was clearly in the festival mood, and was happy to wear a hat with pink neon lights handed over by an audience member. The crowd were equally in the mood, happily joining along in the chorus of the song ‘All I Ever Wanted Was You’.

What another great day lovely weather and a buzzing festival,if the last couple of days are to go by it going to be the final day will be a good one…

Did you catch Mark’s review from day one? Check it out here.