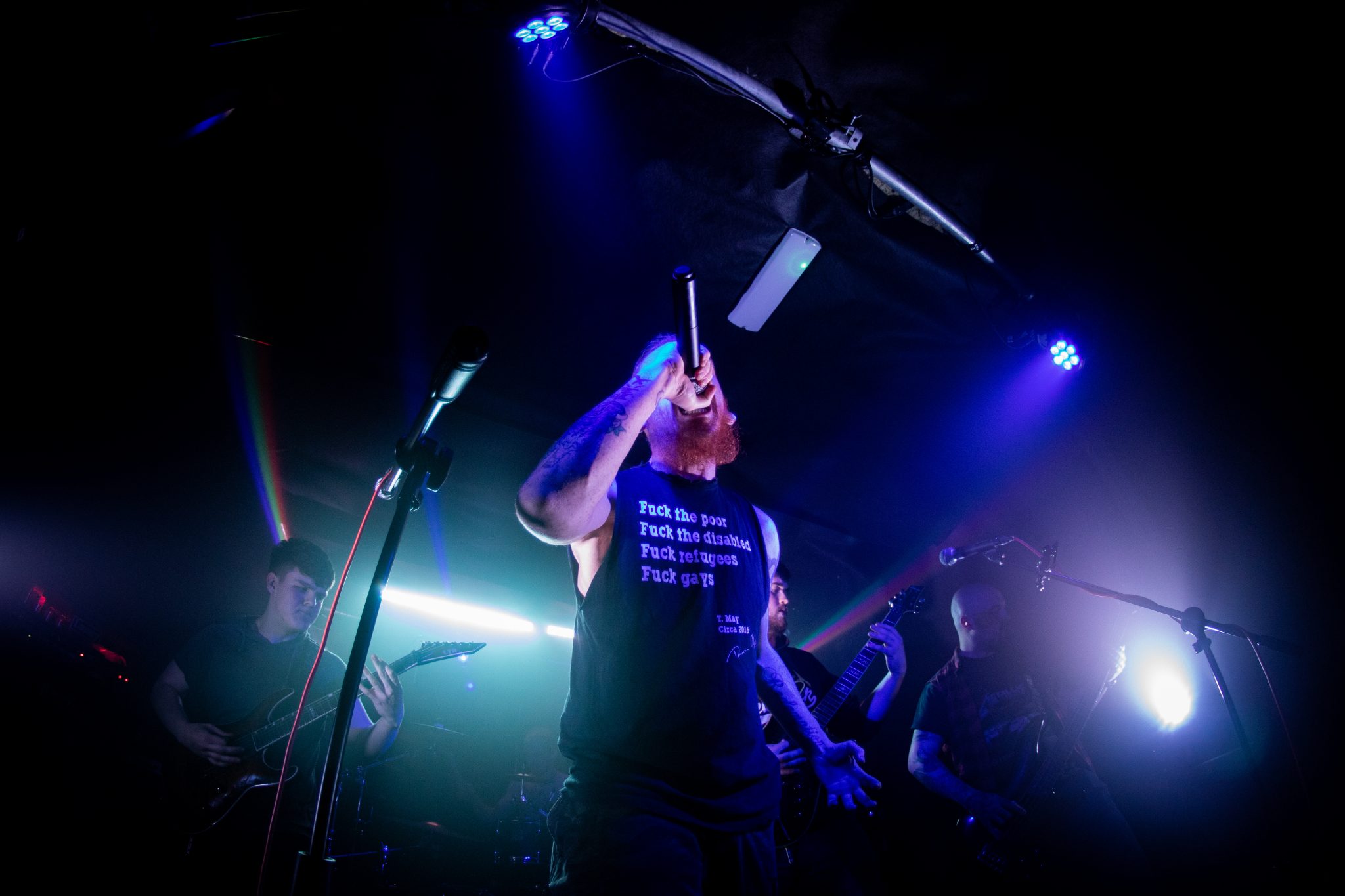 DOMINICIDE with support from SATIRACY and SLIOCH, at The Tooth & Claw, Inverness.

There have been a recent string of shows with one goal in mind, bringing the best Metal bands in Scotland up to Inverness and make them sweat profusely in the eternally tropical Tooth and Claw.  The latest of these nights saw three acts tear up the stage, DOMINICIDE and SATIRACY from Glasgow and SLIOCH from Inverness and the mission was more than successful. The night kicked off with SLIOCH, who weave scottish history and folklore into rapid and unforgiving thrash metal. I’ve seen these guys a few times and they never fail to impress. From behind a wall of smoke SLIOCH erupted onto the stage and it was truly a sight to behold. Songs about “Robert the Bruce and the wee spider that changed the course of history” and a Scottish Cannibal are met with glee as the crowd’s neck begin to seize up from headbanging.  The energy of frontman Mata is impressive as all hell as he jumps from the stage and roams through the crowd barking along with the chaos on stage. Particular highlights for me are “Ancestors in the Sky” which I’ve still got in my head as I type this, and “Churches Curses”. Both tracks are available on their YouTube channel – HERE After a short intermission we were treated to one of the fastest and most balls to the wall bands I’ve ever witnessed. SATIRACY from Glasgow were next up and they really took it up a level for me. Blistering blast beats and some brutal bass drum sections laid down the gauntlet for the guitarists and they more than lived up to the challenge. This is a band that are influenced by some of the most extreme bands out there, personally I felt a real Black Dahlia Murder vibe (which is high, high praise from me!) There was no bassist in sight on this evening, with a backing track taking the reigns, however it took nothing away from the live performance with drummer Oskar playing rock solid along – which at these speeds really is something else. The energy on stage was once again electric (this night did not let up once) and much of this was attributed to the insane guitar work. Massive highlight for me was “Skin Alive” (available on their Spotify) but they ended their set with “Dethroned” an as yet unreleased track – this was a ripping finish to the set and it absolutely destroyed me. 10/10, would die again. I was still buzzing as DOMINCIDE took to the stage – and immediately off the bat the band seemed to have presence on stage – in no small part thanks to frontman YER AULD DA TAM (as he announced with glee). Initially I wasn’t as into it as I had been with the preceding bands. However, after a track or two i was fully committed to losing my mind and going mental. Tracks that stood out immediately were “As The Serpent Rises” and “Monstrosity”  The band channelled some Metallica and other classic thrash bands but brought more of a modern take on the heaviness akin to SYLOSIS etc. The moment of the set for me was the last song, “War Machine”. This instant classic had all the energy and I couldn’t hold it together any longer and most of my pint was lost as I heaved about to the crushing beat – then the dual guitar craziness was in full motion as guitarist Craig Law just ripped it up. Seriously impressive stuff from this cracking band. Overall – this night was a massive success as a fan of heavy tunes. There was a good sized, energetic and invested crowd and there was no nonsense kung fu in the pit which was excellent. Also a massive shout out to Oskar who was drumming for SATIRACY and then also did the whole set with DOMINICIDE – that was some shift and he didn’t slip at all. With announcements to come regarding the next heavy night, keep an eye out and get involved. This is a welcoming community that just wants to have fun, headbang, chant and maybe…Just maybe have a cheeky mosh.

Photos of the evening can be found here