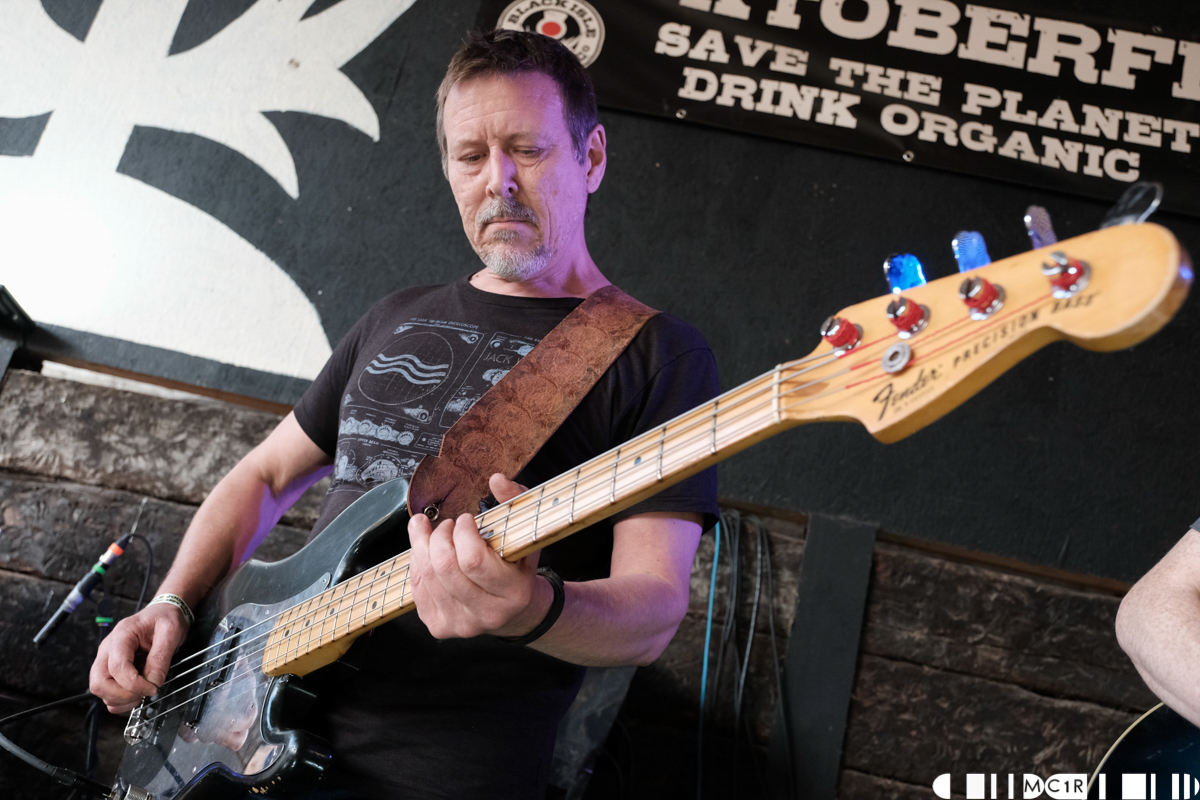 We look at Emma and the Ragmen, Grace and Legend and more, at the Black Isle Brewery based event.

You know the scene, the one that advertisers love, the one that makes festivals idyllic. The easy parking on a freshly cut field, the summer sun, the countryside setting, the quality beer, the spit roast, the smiling festival goers, hay bales and kids enjoying themselves as much as their parents, musicians engaging with their audience etc, etc… Well, this effectively is what Jocktoberfest at the Black Isle Brewery is, and all set on an organic farm to boot.

With it being a brewery there are of course beers, and wine and spirits too, and all reasonably priced, well it is at the brewery door! The standard Black Isle Brewery beers are there, Red Kite, Blonde, Yellowhammer and also a range of specials on rotation, two at a time. Specials which included Tropical IPA, more pineapple than you could put on a pizza, and a Table Beer, for those not wanting the big alcohol hit.

I was looking forward to Rhode Runner, their New England style IPA, but unfortunately I never saw it materialise when I was at the bar but did make do with a couple of cans from the brewery shop when I picked up my car on Sunday. And this is a beer that travels a bit further than the brewery with the cans exported to Western Australia, along with many of the other beers. Enjoy in Perth!

First act I caught were Carma, who were playing the Dutch Barn Stage, one of two stages with the other being the more enclosed Hayloft Barn. Young, fresh faced, the above mentioned advertisers dream. Their songs are light and full of charm, and bright as the late summer’s day. It’s that lightness that engages the audience and works well for those that enjoy that folky pop feel. Ideally matched to the festival they encapsulate the feel of the growing crowd.

Next up were Never Knowing, a young, equally fresh faced, band from Inverness. Never Knowing ramp it up a few notches and give a lively set of accessible rock music. There is a real familiarity to the open of many of their tracks when you are lulled into expecting a Guns N’ Roses cover or a slice of Nirvana. It works with the growing audience and fits with the festival ambience.

There were a number of changes to the line up and the absence of Mt. Doubt was one of them. But, if you want to tear a hole in a festival that it never realised that it needed torn then bring King Kobalt, and this is what they did. A slightly shell shocked Dutch Barn were given their full force but there were still some nodding heads giving full appreciation.

In the Hayloft, the stage is in a raised section of the building which looks out upon the barn with seated areas to either side and space for standing in the middle, something more Latin was cooking. Coco Teniora was bringing a touch of Ecuadorian folk to the stage and this was fitting with the eclectic nature of the festival. Her warm personality shone between songs and you couldn’t help but smile throughout her set in this place that she calls home. You can catch Coco at The Eden Court on the 15th of September, tickets are available here.

AJ Still, with his quirky Mr Still backdrop, carried on the acoustic feel that the stage embraced in the afternoon. Formerly the front of long running local legends, Galipaygos, he threw a song of theirs in, but more telling he did say that a cover says a lot of an act and their influences and went on to play Chas ‘n’ Dave’s ‘Ain’t No Pleasing You’… If the truth be told it’s one of my favourites too. But who shouted for him to play ‘Rabbit’!

Sara Bills and the Hasbeens epitomise the festival with their crowd pleasing, customer friendly set. It brings people together, it creates that feeling of unity. ‘Groove is in the Heart’, it truly is. Such Deee-Lite.

The acoustic theme of the early afternoon was giving way to some livelier sounds. Tistik, whose name reveals a lot of his background, used his words to effect; captivated and switched the mood. Accompanied by Dj Butterscotch it moved the atmosphere of the barn. It’s not easy to change the direction but he did.

Grace and Legend picked up the baton left by KING KOBALT and grabbed it by the scruff of the neck and truly gave it a shake to within an inch of its life. Another band intent on tearing a chunk out of the festival, which they did, Shock and awe, but mainly awe, the awe of the little kids at the front who enjoyed every minute, or maybe that was just pure awe. Whatever it was it worked for them, and those who wanted to rock hard, and there were a few.

Esperi, in the Hayloft is no stranger to the festival, but instead of his array of instruments, and improvised instruments, he was rounding off a set with covers. It’s know your audience time. Coldplay’s ‘Viva La Vida’, Daft Punk’s ‘Get Lucky’ and ‘Sit Down’ by James.

There is a moment in every festival, wherever you are, that changes it; steps it up to a different level, Ruaridh Maclean  was that moment. I’d never heard of Ruaridh before. Ruaridh does ceilidh music, on an accordion, like no one’s business. And he does covers too but he also knows how to engage an audience, and that drew a big crowd to the Dutch Barn, and oh did they enjoy it, they really did, and there was a richly deserved encore.

Emma and the Ragmen took full advantage of the atmosphere that Ruaridh had created, not that they really needed it as they showed how to rock and to roll. This was real throwback stuff and what wasn’t there to like. With the absence of Busker Rhymes this was more or less a double set that stirred and shook the Dutch Barn. Much energy was used up as they belted out their set.

My night was drawing to an end, those beers do eventually take their toll, but by now the sun had set and the lights strung across the festival site were emitting their warm glow and although the temperature had dropped there was still a warmth, not just from the lit logs, especially amongst the dinosaurs, those that made the most of the festival theme.

The dinosaurs may have become extinct but this festival, barring the odd meteor strike, should have a fair few years in it yet. If all festivals were like this the world would be a more contented place, but for those who attended at least that little place where they reside is just that little bit happier, and should, with the festival afterglow, last for some time yet.

Missed Friday night’s review? Read it here.
Catch the images of all the acts here. 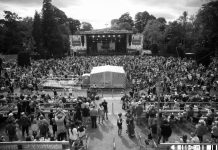 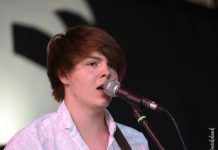 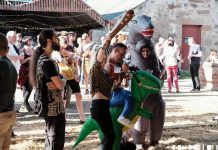 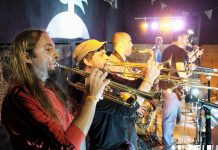 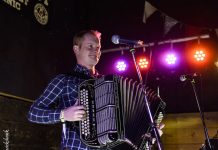 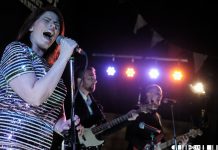