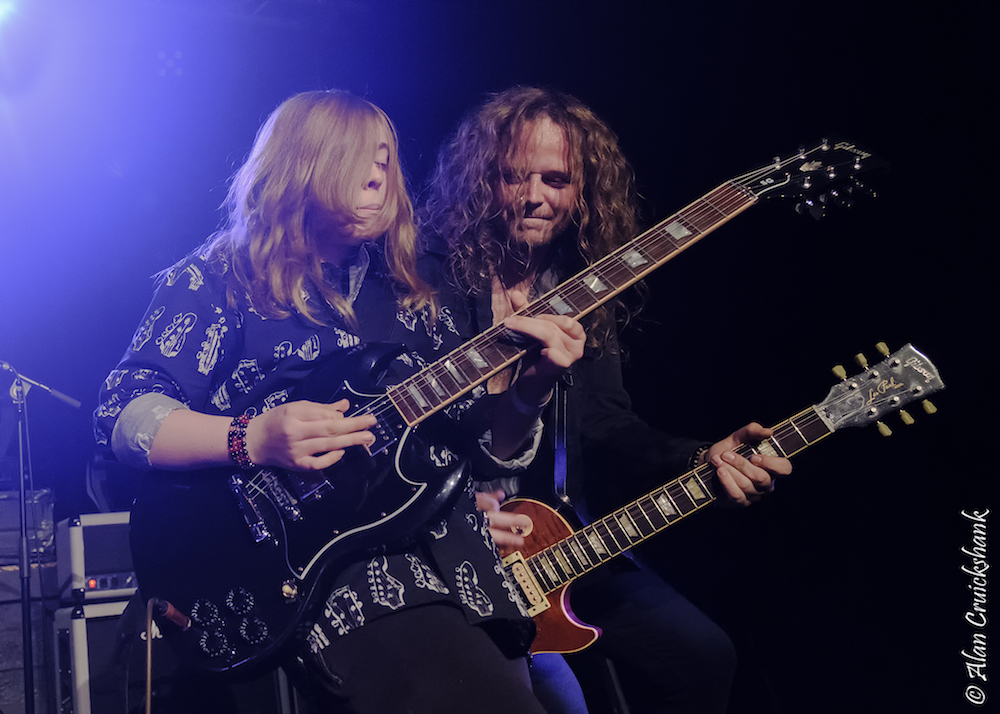 Bad Touch , with support from Daxx and Roxane and Aaron Buchanan and The Cult Classics, at Ironworks, Inverness.

All the band’s on tonight’s bill have featured on Planet Rock playlists and it’s a credit to the headliners that they’ve chosen to take a couple of very strong support acts with them.

First on and despite sounding like they might be an obscure Europop combo, support Daxx and Roxane are anything but poop. The Swiss band channel the classic rock sensibilities of their peers on the bill and kick the evening off in style. The buzz words from the band here are ‘party’, ‘drink’ and ‘shit loads of drinks’ and they play like they mean it. We’re here to listen to rock music and this is exactly what we get from the off. Single ‘Ticket to Rock’ is a slab of AC/DC-esque rock nonsense, perfect for a Friday in Inverness.

How to ingratiate yourself with Highland audiences:  give them whisky. A few healthy drams were handed by the band to anyone down the front showing an astute awareness of how to win over your average Invernessian.

Aaron Buchanan and The Cult Classics are on next and if anything this is where the evening slips a little. A little too slick and polished for my tastes and the bassists continual ‘I’m mad me’ mugging and posturing quickly becomes tiresome. The band themselves are a tight and polished unit but the tunes lack the grit and hooks of the opening act. There’s a sprinkling of Heaven’s Basement songs in here (Buchanan’s previous band) and they sit well enough with the rest of the set. However filling nearly half the set with your old band’s tunes suggests a lack of confidence that the newer material can hold its own. Closer ‘Morals’ is a strong finisher though and it’s an indication that the band have plenty more to come.

How not to ingratiate yourself with Highland audiences: claim lager is a ‘real man’s drink’, proclaim whisky is shit and shout ‘come on Glasgow!’ a handful of times.

The last time Bad Touch were here they impressed us as one of the support acts for Skid Row. This time they’ve got more time to impress and their new album ‘Shake a Leg’ to show off. Classic rock seems to be having something of a resurgence over recent years with Rival Sons, Temperance Movement, Greta Van Fleet and Dorothy all turning heads. Bad Touch can surely count themselves among their peers and tonight’s performance is a masterclass on delivering over an hour of solid gold, straight down the middle rock music.

Frontman Stevie Westwood is as charismatic as they come, slinking and grooving on the stage with the vocal pipes to match. It’s not all balls out cock rock either, the slower tunes have buckets of passion and lead guitarist Rob Glendinning wrings out some beautifully soulful solos from his Les Paul.

British bands have always had a knack of taking Southern Rock influences and morphing into their own and here Bad Touch are no exception. The focus is of course on the new album and rightly so, it’s one of the best rock albums to be released this year. Single ‘Skyman’ is a stomping tribute to Duane Allman while the driving riff off ‘Moving on Up’ is a suitable counterpoint to the slower and heartfelt ‘Take Your Time’.

For ‘Hammer Falls’ we’re treated to a guest appearance from guitarist Geal Thompson. Geai is possibly familiar to some of you already as the twelve year old wunderkind from Forsinard who is something of a prodigious talent on the guitar. Bad Touch had clocked his YouTube covers of their songs and invited him on stage to take the lead guitarists spot… and he’s in serious danger of putting Glendinning out of a job!

It’s a note perfect performance, he even gets to do the solo twice due to an issue with the guitar pedal on the first go. Already giving Dave Grohl a run for the money as the nicest bloke in rock, Geal is a star in the making and seems utterly unfazed by the whole thing.

‘My Mother Told Me’ continues on from where we left off and includes the ubiquitous call and response singalong that’s a legal requirement for any rock show. They close with fan favourite ‘99%’ and it’s a dedicated to Rachel and Liam who were recently engaged. The lyrics ‘I’m 99% sure I love you’ are, I hope, not a reflection of their relationship!

The new wave of classic rock continues unabated and Norfolk’s Bad Touch are worthy bearers of that particular flame. Bootiful.