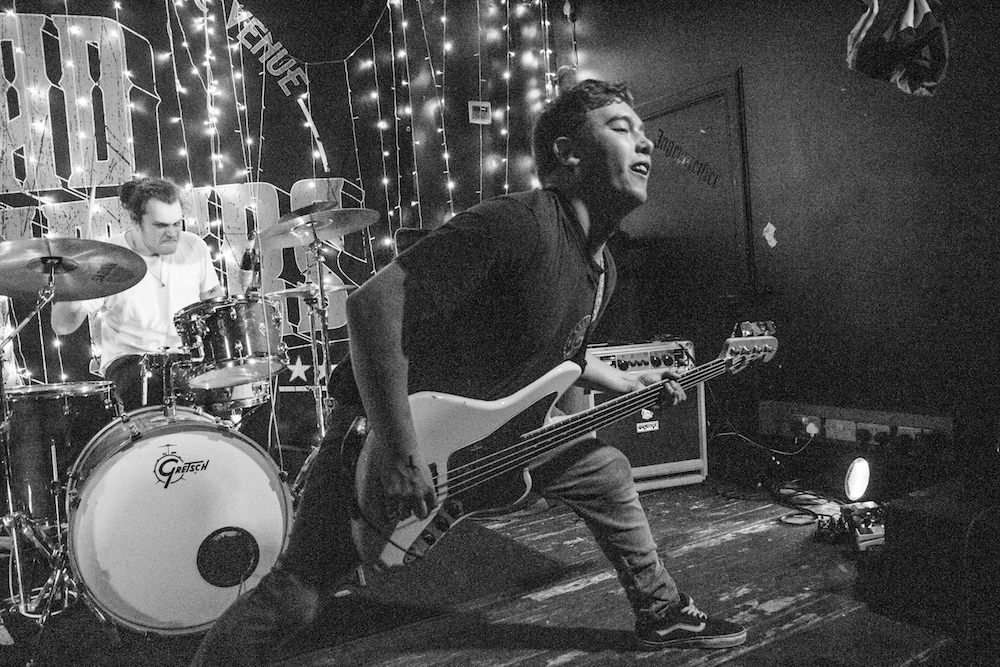 Sharkteeth Grinder , with support from Drinsipia and Section 9, at Mad Hatters Inverness.

Originally billed as the Outsider Art Fest and to be hosted in a different venue entirely, events conspired against Earth 616 Promotions and the promising mini festival had to be cancelled. Credit must go to Stephen Baikie from Earth 616 for salvaging something from the night. A two hour slot in Mad Hatters was admittedly much shorter than the original festival but it was far better than having nothing at all to show for their efforts.

First up we have Section 9, the Death Metal quartet are a still very raw having only started playing live a few months ago. It’s a bloody racket but there’s the bones of a solid live act here. Their final tune, the punk infused ‘Everything’s Fucked’ is probably the best of the set and arguably one of the best tunes of the night.

On first listens I’d suggest heading down that direction rather than the doomier end of music that they’re leaning towards at the moment. This very much sounds like a band finding their feet and I’m looking forward to see where they go. Extra points to their bassist for pulling for some properly impressive head-banging!

Drinsipa are on tour with the headliners, both bands putting in the miles to travel from Corby to play only two dates in Scotland in Aberdeen and Inverness. Math Core can be a problematic genre for some, the timing changes, key changes and assorted other musical jiggery pokery can put many people off. However as a fan of prog rock I’m a big fan of funky timing changes so I can get behind this sort of thing all night! At a times a challenging listen they can flit between sonic rage and moments of near melancholia in a beat, they’re constantly teetering on the edge of utter chaos but they play with that knife edge with aplomb and it’s extremely effective rather than distracting. In a word, uncompromising.

While Drinispa are uncompromising, headliners Sharkteeth Grinder are completely and utterly unhinged. This is aural carnage from the get go. Frontman Bobbo Haldane spends most of the time screaming into his mic whilst prowling the venue getting up close and personal with punters. In terms of passion this has to be one of the most energetic and honest performances I’ve seen in a long, long time. It takes me a few minutes to twig that, despite the noise coming from the stage, there’s only a bassist, vocalist and drummer, there are no other guitars, keys or effects.

This isn’t just a racket for the sake of it though, there’s structure and energy here and Haldane’s performance pushes the band along as it becomes more performance art rather than ‘just’ a live gig by three blokes from Corby. If that sounds pretentious, it’s anything but. The commitment to their music is clear and there’s times I worry for Bobbo Haldane as he screams, yowls, slaps his head, crouches on the floor, waves a stool around, clambers about the furniture and twists and contorts himself along with the music.

It’s mesmerising to watch as the band quite literally throw themselves into their art. Ultimately no harm is done though and the short set comes to an abrupt stop as we run out of time in Mad Hatters. And I’m off for a lie down, I am 42 you know?

It’s a shame that the original festival came to nothing and I hope this isn’t the last we see of the concept. Music and visual art is something that obviously overlaps and the idea of having a festival where visual artists display their work while the bands play is one that definitely has legs in my view. Leah Davis (Mixed Media Artist) and Rebecca MacDonald from Little Haggis Art  both had material on display last night and their work was a great match for the music. My only slight criticism is that no-one had thought to provide any lighting to properly display their work. As we all know Mad Hatters isn’t the brightest venue in the world!

There’s a seed germinating here though and I genuinely hope this isn’t the last we see of the Outsider Art Fest.

Read our interview with Sharkteeth Grinder before the gig; 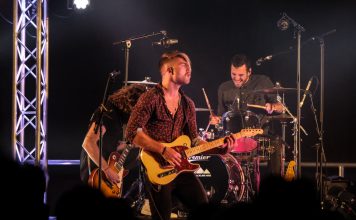 Will Irvine of Hunter & The Bear – Interview