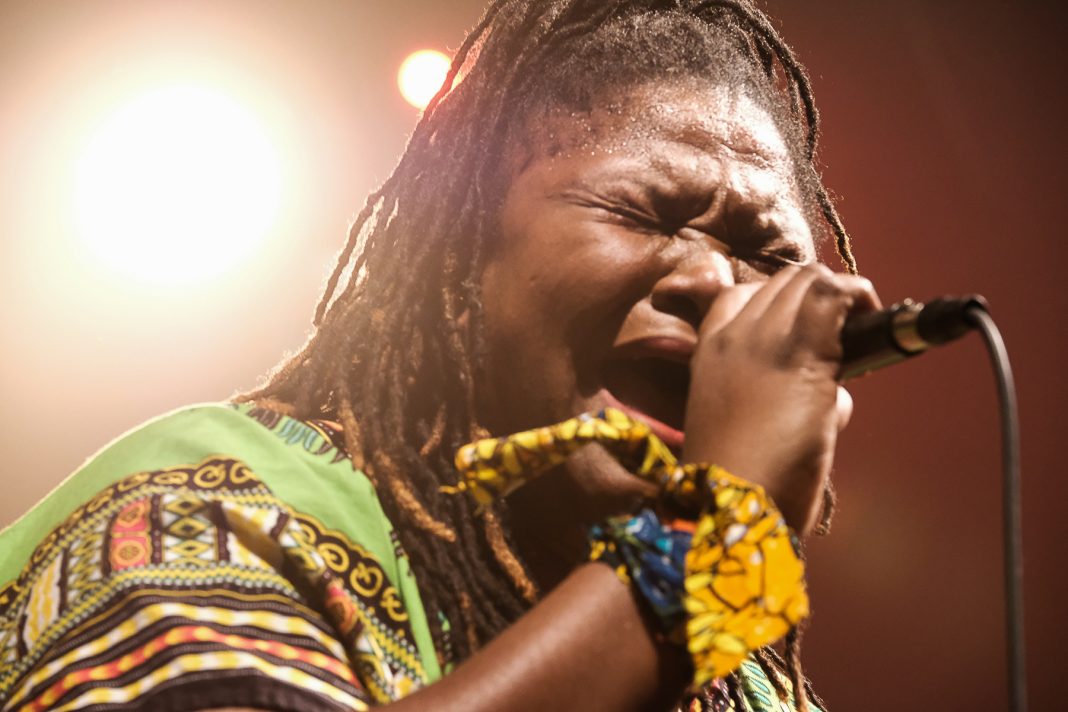 After a week travelling the length and breadth of the Highlands and Islands, including a 4am start on Thursday morning, a gig at the Ironworks didn’t seem to be the best of ideas and the thought of heading out into the gloom was viewed with a distinct lack of enthusiasm. A quiet word with myself and bucket of coffee later and I’m faced with a riot of sound and colour on the stage as Arrested Development make their entrance.

Fareedah, resplendent in red dreadlocks dances like a women possessed

Upbeat from the start, their energy is infectious and any thoughts of sleep are quickly banished. Dancer and singer Fareedah, resplendent in red dreadlocks dances like a women possessed and holds absolutely nothing back. The rest of the band are incredibly tight and perform with humour and gusto despite a disappointingly low turnout.

their themes of tolerance, spirituality and revolution are just as valid now as they ever were

The debut album ‘3 Years, 5 months, 2 Days in the Life of…’ forms the core of the set and it’s remarkably how well these songs have aged. It’s safe to say that they haven’t dated and certainly their themes of tolerance, spirituality and revolution are just as valid now as they ever were… if not more so. ‘Mr Wendal’, a song focussing on homelessness, is occasionally accused of being overly earnest, a somewhat po-faced opinion when you consider the band had more social conscience than many of their peers of the time. The content may well go over the some of the heads in the audience tonight but maybe that’s all that needs to matter this evening.

They’re not shy of mixing it up a little and the medley of ‘Jump’ by Kriss Kross and ‘Jump Around’ by House of Pain drags any stragglers down towards the front of the stage.  We’re given a masterclass in hip hop, r’n’b and soul and it’s a genuine joy to watch. ‘ I Don’t See You at the Club’ from their new album ‘Craft and Optics’ still has the theme of social conscience that the band are known for although amongst the more serious content the lyric ‘They’re saying that I’m old like it’s something I can’t control, Ageing is part of the package deal of having a soul’ is something I might have to borrow when I’m next hectored by the surly teenager I have living at home!

it’s a much needed summery vibe that we all needed

Of course the hits go down as well you as might expect. There’s a cheeky teaser for ‘Everyday People’ before they segue into a cover of ‘What’s Going On’ by the 4 Non-Blondes. Said song finally getting its airing at the end of the set. ‘Tennessee’ takes us all to another place before the band finish up for the night and it’s a much needed summery vibe that we all needed, anyone hoping for a quiet night would have left disappointed.

Photos of the evening can be seen at