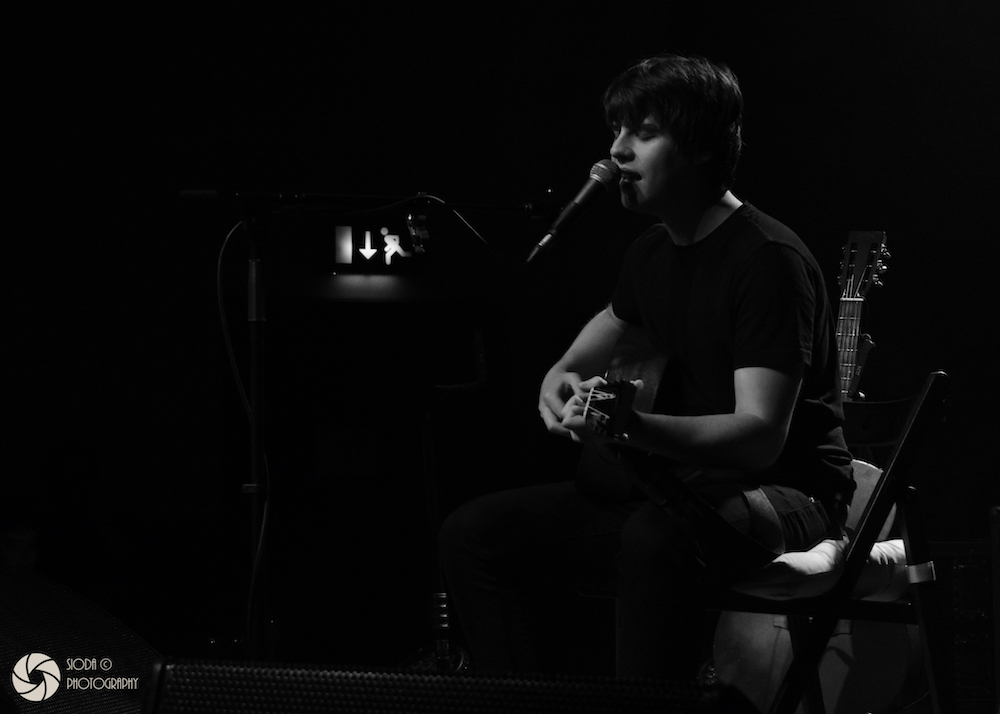 Last November Jake Bugg played Strathpeffer in front of what was one of the worst audiences that I’ve had the misfortune to be among. The level of ignorance and appreciation of the performer was beyond belief and I was genuinely surprised that he was coming north so soon to play another acoustic show. The Ironworks were clearly aware of the issues surrounding that gig and took steps on social media, and in the venue, to put up posters with the message ‘If the band is interrupting your conversation… you’re in the wrong place’.

For opener Declan J Donovan he did a sterling job as he let his soulful voice drown out any early chatter as the tanked up crowd was filling up the venue. He hit a good rapport with the audience with his warm songs and in ‘Vienna’ a tale of love involving his friend who was on merch duties on a previous tour and a girl he met on that tour. His short set was rounded off with new single ‘Pieces’ a strong track which would appeal to the fans of the likes of Lewis Capaldi.

Although I still plant the blame of the Strathpeffer gig firmly at the feet of a large section of the audience there was a clear disconnect between both parties as the set was mellow and Jake sat throughout the entire show. The setup tonight with Jake standing centre stage which gave him greater presence and the build up to him arriving on stage was creating an atmosphere of anticipation. Beforehand I had been concerned that we were going to get a very similar show to a year ago.

Opening with ‘How Soon The Dawn’ there was a clear connection with the enthusiastic audience, but that enthusiasm was not complete and there was a level of background chatter but over the opening songs his distinctive vocal, fierce guitar playing, and choice of tracks ensured that there would be no repeat of last year’s debacle.

an upbeat and passionate setlist held the audience

Jake was much more engaging with the audience and grateful of their applause. That’s not to say the audience behaviour was perfect, far from it, but an upbeat and passionate setlist held the audience.  There were those who clearly knew only one song, unsurprisingly that was ‘Lightning Bolt’ as they would shout for it between each song, but Jake did assure them that it would definitely be played but not yet. There was an air of disdain when letting that be known. The likes of ‘Country Song’ was an opportunity for some to have a chat, a point at which it could have all disintegrated. However, the gentle ‘Broken’ produced a sing along which drowned out the babblers and was one of the highlights of the evening.

That’s not to say the audience behaviour was perfect

There was an emphasis on the higher tempo and the more rousing tracks, even the cover ‘The Love Bug’ kept it moving along, and as it drew towards a close ‘Two Fingers’ got the crowd jumping, while ‘Messed Out Kids’ which was a request from the floor following Jake asking for suggestions set it up finely for ‘Lightning Bolt’, and on that note the night came to an end.

Clearly the Ironworks had anticipated the potential for a repeat of Strathpeffer, and Jake’s approach to the show was more engaging and overall it worked. He’s not Gerry Cinnamon, Jake isn’t that kind of street musician, but to some of the audience that was possibly what they were expecting judging by their lack of knowledge beyond ‘Lightning Bolt’.

However, the ultimate judge was Jake whose demeanour at the end was that of an artist genuinely appreciative of his audience, a far cry from his last venture north.