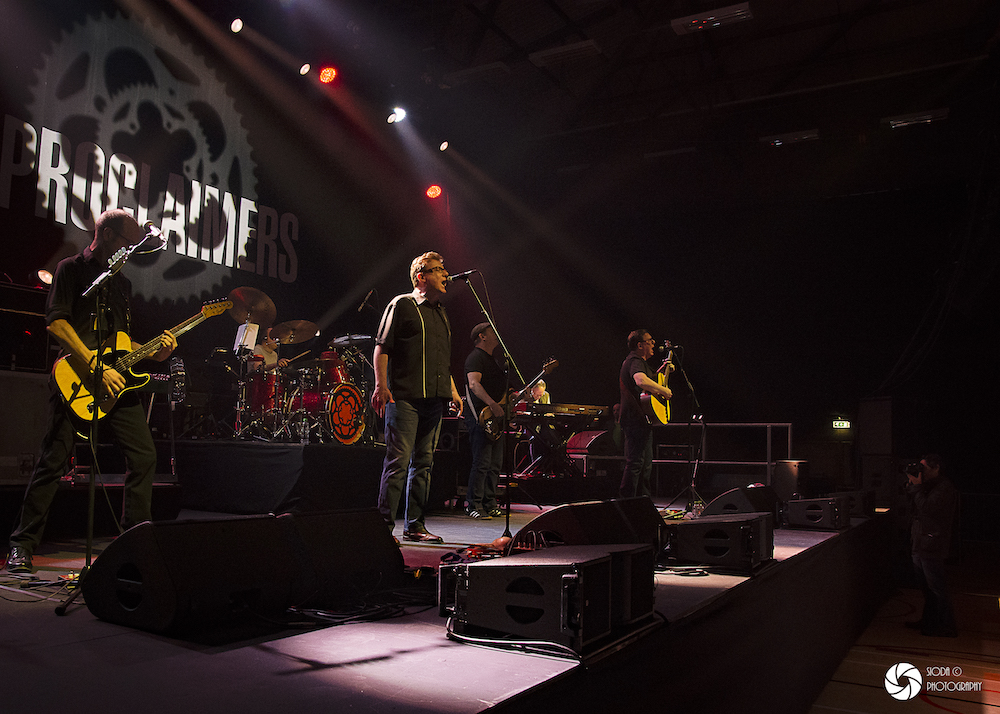 The Proclaimers , with support from  Jack Lukeman, at Inverness Leisure Centre.

The Proclaimers are no strangers to Inverness most notably playing smaller venues way back in the day, but tonight it was the Inverness Sports Centre, which despite its name has surprisingly good acoustics.

Opening was Jack Lukeman, an Irish singer-songwriter, but maybe performer should be added to that. Entertaining a growing audience which approached 5000, is no mean feat and it takes more than blasting out a few tunes with a guitar. Early in his set Jack employed a ukulele which sat above his guitar, with the large venue this never quite caught the audience but was still an introduction to what was to come. With the added power of the guitar he whipped up the crowd and was able to get a sizeable number to sing back to him in ‘King of Soho’.

there is a certain flicker of Neil Diamond to his voice

It would be easy to draw lazy comparisons with the likes of Van Morrison, Jack is much more accessible on stage (and off), but there is a certain flicker of Neil Diamond to his voice. It’s that voice that sells it and ‘Old Man River’ delivers it. You can catch him next year in a much more intimate venue at the Tooth and Claw on 6 March. Mark your diaries.

Craig and Charlie Reid then took to the stage with their full band. Opening with the title track to their latest album ‘Angry Cyclist’ it is clear early that there is more to The Proclaimers than the Reid brothers, this is a rock ‘n’ roll band. The opener, although less well known to many, is a belter and sets the tone for the night. It’s not long before ‘Letter From America’ gets an outing and the crowd singing along. Crowd? It’s more like family as the songs are sung back and dedications are read out for different songs. I’m sure I heard a mention of someone from the Railway Club in there.

it takes the acoustic beginnings into a band setting and it’s all quite glorious.

Although out to promote ‘Angry Cyclist’ the hour and half set covers the full range of The Proclaimers 30 plus years in the industry, and it takes the acoustic beginnings into a band setting and it’s all quite glorious. They have an ability to hold an audience and then have them join in without being asked ‘Let’s Get Married’ and ‘Sunshine On Leith’ being good examples. New tracks ‘The Battle of the Booze’ and “The Hours Between’ sat comfortably proving that they are as relevant as ever.

However, as with any successful band there are must play songs; they are sacrosanct and if they weren’t played it would leave an audience short changed. These are interspersed throughout the set and it is no surprise that one of Scotland’s alternative national anthems ‘I’m Gonna Be (500 miles)’ rounds off the main set.

An encore ensues with the folky, and very political, ‘Cap In Hand’, ‘Make My Heart Fly’ and ‘The Joyful Kilmarnock Blues’ with drums and keys crashing down bringing it all to a very rock ‘n’ roll close.

The Proclaimers have a formidable songbook, one that captures a cross section of society, whether they touch on politics, life, love and all that surrounds that, they connect. Connect to such a level that to just about everyone in the sports hall it was 90 minutes that flew by. As with Jack Lukeman, The Proclaimers are also returning, next summer, 6 July, to The Big Top in the Bught Park. Buy your tickets here.