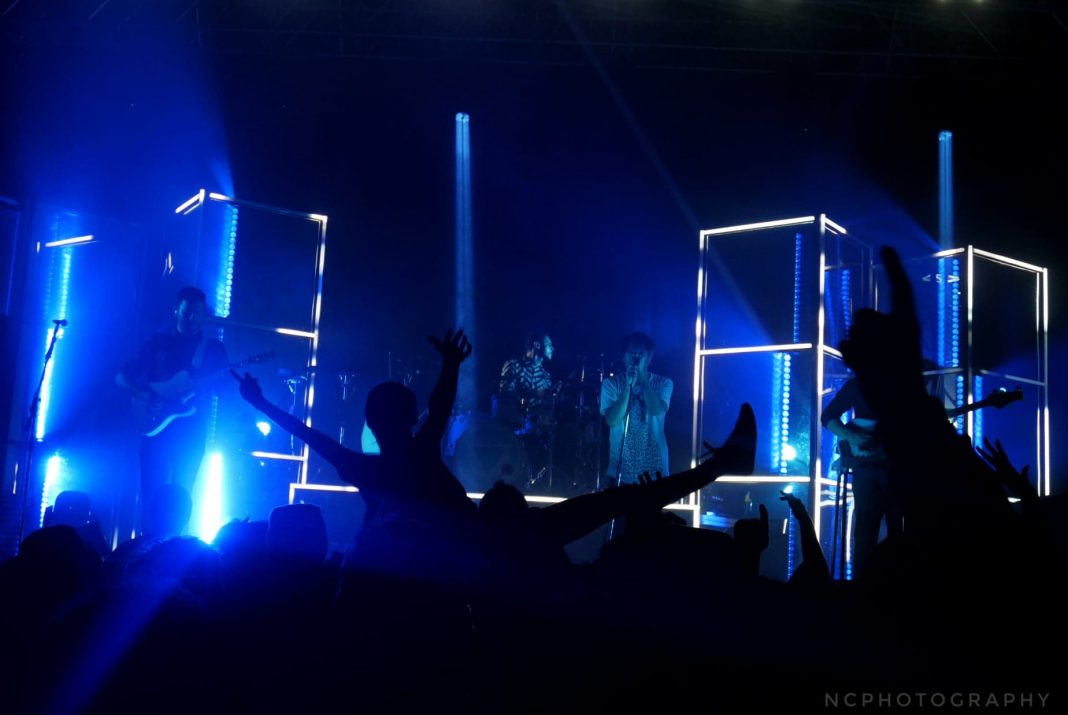 A long awaited night for many people was finally here – Enter Shikari back at the Ironworks for the first time in six years as part of a mammoth 28 date tour of the smaller and less frequented towns and venues across the UK.

Rou Reynolds and company are a band that have a devout following from their days cutting their teeth in the tiny venues across the UK (including a legendary show at Downtown USA in ‘06) and it shows as the building is buzzing with anticipation for them to take to the stage. Somehow this is my first time seeing Shikari, as I swear I was supposed to get to at least one of their previous four (I believe) appearances…

this band are so impressive live and should surely be at the top of most music fan’s watch lists.

The room is getting impressively full this early on – people are eager for the show and you can feel it. Our openers for the evening are Progressive Rockers BLACK PEAKS from Brighton, and whilst the crowd take a little while to warm to them, they were receptive and genuinely played a belter of a set.  It was only five tracks, but each was excellent. They opened with “Glass Built Castles” – a personal favourite and the first track

I’d heard from their debut album “Statues” – which is a perfect way to introduce this band, tempered quiet quickly transforms into furious, raw anger and then as quick as you know it, you’re soaring through a huge chorus. By the end of their all too short set, which was closed by the unbelievable “The Midnight Sun”, BLACK PEAKS had managed to bring the crowd into the room with them and got a very respectable reception – this band are so impressive live and should surely be at the top of most music fan’s watch lists.

Before tonight, I’d only heard incredibly positive things from the Aberdeen and Glasgow shows about BLACK PEAKS and boy oh boy they were on the money.  The same could not be said for Palaye Royale who have seemingly been having a bit of trouble on this run with Enter Shikari – I’ll be the first to admit that this was stylistically a heavy clash – but I don’t believe it warrants the hate the band have received on some of their dates.  Thankfully Inverness did not carry on like that – with a generally pretty receptive (with a particularly enthusiastic section) crowd appreciating the set from the 5 piece from Canada.

Whilst it really took a while for me to warm to them, by the second half of their set I was into it far more.  As they worked in more of their hard rock vibe the show really picked up and the band seem to have a sound that would suit a massive arena type tour.  Frontman Remington Leith seems to completely revel in his role and took to the crowd and the stairs of the venue – this wasn’t taken lightly by security and he was tackled to the ground.

At this point – the show was shut down (as had happened previously on a Welsh date of the tour) and the band continued on best the could with only the amps on stage – however this was a flat finish to what was ending up a pretty engaging show when all was said and done.  Really not my cup of tea, but I can see why people like them – especially considering how polished their set was.

After a decent interval – we only had moments to wait before the real heroes of the evening, ENTER SHIKARI would be gracing the stage. This was by far the best setup I’ve seen on the stage at Ironworks – an incredibly impressive array of perspex prisms lined across the stage to either side of the drums, which throughout the set were lit up with lines of LEDs that traced the shape of the prisms – incredibly cool visual work which really worked the entire real estate on the stage and shows you can still put on an impressive stage show in smaller venues across the UK.

Opening with a track from their latest album, “The Sights” quickly showed that the crowd was here in fine singing form – and didn’t just need early material to be excited – which then was peppered in with a couple which was finished off with “Labyrinth” which paired with confetti cannons firing near the end made this show feel special (we were only three tracks in!)  The whole set was punctuated very nicely with a great flow throughout – with some acoustic work from the band and then at one point a trumpet which was awesome.

We then had a quick toast as it was Burns Night – would be rude not to! – and we went diving straight back into a medley of what I could only describe as “bangers”.  We had a dash of “Ghandi Mate, Ghandi” a sprinkling of “Mothership” from their first album and the crowd were in the palm of SHIKARI’s hands at this point as they mashed up tracks – which they did later on in the show to great effect – and then morphed effortlessly into their take on Insomnia by Faithless.  Quite the experience to see this live I thought.

We’re then treated to the twisted synth of “Havoc” with rave levels of lights craziness on stage – which is then countered with the crowd being brought down a little bit with some solo Rou Reynolds who was channelling his inner piano-man with his very own ENTER SHIKARI branded Piano on stage – whilst this may sound slightly daft it worked very well and was a great touch – allowing Rou’s bandmates, and the crowd a brief reprieve from the chaos that the band bring on a consistent basis throughout the evening.

The band break into “Undercover Agents” from their most recent album  and it dawns on me just how much the crowd has been bouncing throughout the show a real testament to how much the band give out through their show.

Moving on to a quickfire round bringing the real heavy hitters out and being described as eight minutes to play four tracks – launching into “Sorry You’re Not A Winner” sent the place ballistic – and any self respecting ex-scene kid knows those three claps are too sweet to resist, swiftly following up with shortened versions of “The Last Garrison”, “Meltdown” and “The Anaesthetist”.

This in itself would’ve been enough of a powerful combo to finish off the night, but Inverness needed more and unsurprisingly chants of “ONE MORE TUNE” rang through the Ironworks and surely enough the boys took to the stage to finish off the night with “Juggernauts” and finally “Live Outside” which is still stuck in my head – a real feelgood track to bring an end to a fantastic night of music (oh and more confetti cannons!)

Rarely are we treated to such a great band playing in Inverness with such a big stage show, an incredible set and strong support, so it was very heartening to see a really good attendance.  I’m sure it won’t be the last time they play here – and I’m sure I’m not alone in hoping it’s not too long before we get to see them again.

Photos of the evening to follow soon, in the meantime check out our photos of the 2013 gig; 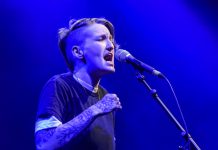