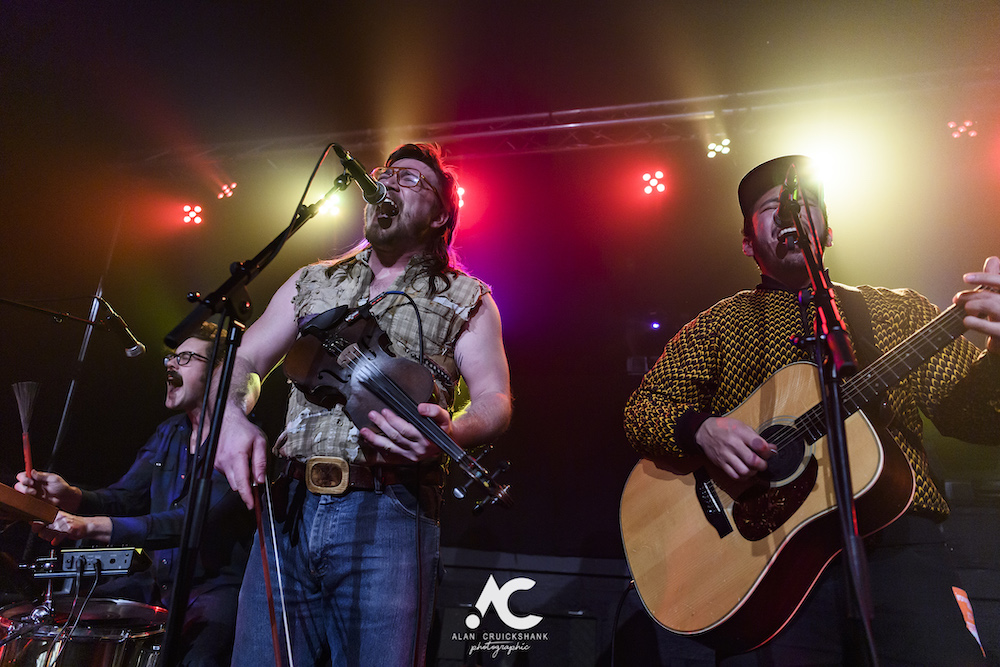 Whiskey Shivers, with support from Dr Wook, at Ironworks, Inverness.

Dr Wook has been a fairly constant presence on the Inverness music scene for a number of years now, but of late he has been quiet and admits tonight’s gig is his first ‘in a while’. However, there’s no sign of any musical rust and it’s a nice reminder of the talent to be found in the Highlands. Clad in a wooly hat and boiler suit he looks like he’s just hopped out of the engine room of a trawler…

‘You’ll be wondering about the boiler suit… Elvis had his suit and I look like super Mario’s scruffy homeless brother’.

As usual Wook performs on his own with just a guitar for accompaniment but despite the stripped-down sound he’s still raw and ballsy. Springsteen’s scruffier younger brother if we’re going to stick with tenuous comparisons. His Americana tinged tones set us up nicely for the main act.

The Whiskey Shivers announce that, “we’re just gonna party” and launch into their set. Initially it’s chaotic and disjointed and if you’re a pitch perfect perfectionist then you’d struggle to make sense of it. But they do manage to generate a monumentally huge noise with what is essentially just amped up acoustic instruments. Banjo player James Bookert struggles to keep the instrument in tune, blaming the cold, while fiddler Bobby Fitzgerald asks the audience, ‘could you just drink enough so the banjo sounds in tune please…. and if you drink enough, you’ll hear two!’ Bobby, it should be said looks a little like Bruce MacGregor if Bruce grew a mullet, moustache and took to wearing sleeveless plaid shirts.

Introduced as, “maybe you have a shitty boss or president then this song is for you”, ‘Fuck You’ is an anthem for those of us dreading heading into the office on Monday morning. They murder a cover of ‘Friday I’m on love’ by The Cure but they get away with it because clearly, we’re not supposed to take it all that seriously. There’s a brief blast of ‘The Trooper’ by Iron Maiden which sounds impressive when the dueling lead guitars of Messrs Murray and Smith are replaced with a twin attack of banjo and acoustic guitar.

There’s plenty of good-natured heckling aimed at the band with one lady announcing that, ‘you’re definitely better than average’ and the response being, ‘You’re remarkably articulate for a bluegrass crowd’.

The frenetic pace is great if you’re in a mind to party but it’s when they slow things down that the band really come into their own. The novelty of the furious punk speed metal ferocity of their faster numbers gives way to some genuinely good bluegrass. The faster, more chaotic numbers could lose their appeal if that’s all they did, but the slower more soulful numbers prove that there’s real talent and depth to the band on stage. ‘Long Low Down’ set to the music of ‘Dirty old Town’ by Ewen MacColl is a nice nod to their roots on the other side of the Atlantic. ‘Angel in the Snow’ with its cheerful whistling is as jaunty as it gets and could be said to be the counterpoint to the earlier anti-love song of ‘Fuck You’.

The encore is played acoustically and in the centre of the room rather than on stage and it’s a wonderful way to end the evening. I can’t recall a band ever doing this before and it works brilliantly. The band are in a tight circle surrounded by the audience as they perform ‘True Love (Will Find You in the End)’ and it’s a nice touch to finish off the set.