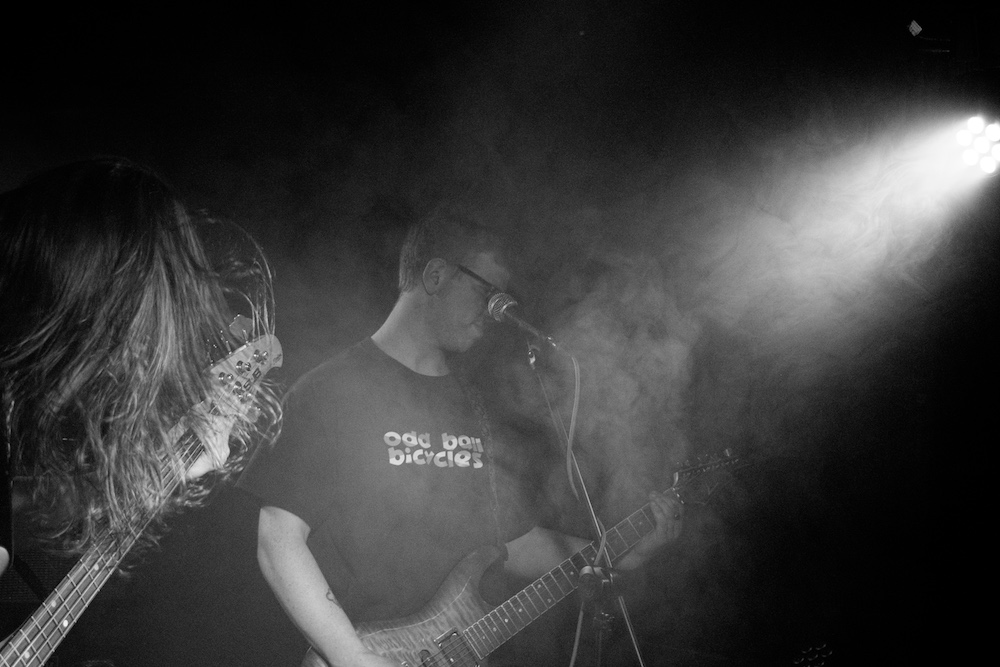 Last night was the coming together of six bands within the Forres hard rock and heavy metal scene and beyond, at a venue mostly used as a bar in the Forres town centre. The Eagle Bar offered a sizeable stage and dancefloor, with a bar behind for refreshments.  This was the second of two events, with ForresFest V: Saturday taking place last night (February 23).  Hard work, excellent organisation, always running on time, even ending slightly earlier than anticipated.

Last night there were the likes of bands such as Section 9, Drekavac and Civil Punk.  Some might remember Section 9 from the Memorial Parasite EP launch in September, Drekavac from Full Metal Haggis Indoor festival in December and Civil Punk are relative veterans from 2014 yet remaining relatively fresh faced.

The first support act, Bitterwood, were a post hardcore spoken word Aberdeen four-piece.  These guys were somehow sedate with a certain tension in the air, before heralding into sizeable volume.  Then intense, screaming blue bloody murder.  The vocalist then went rampaging into the crowd.  This all interspersed with aforementioned spoken word, plus a young kid moshing in the crowd, giving all he’s got.

Subsequent At Their Mercy were an oldschool four-piece hardcore band from Fife. They were crazily fast, with some grooving riffs.  The frontman had an imposing and intimidating stage presence, right on the floor and right in your face.  A thrashing, crashing cacophony with strobe lighting making for some trippy moshing. Metallic punk with more bottle than fellow Fifer, Doug Rougvie.

Now four-piece Inverness death metal punkers, Section 9.  There was an unmasking of the vocalist into bleak, windmill motion music; a parting of the seas for opening track, “Silent Annihilation”.  “Stroke” was a scattergun and quite skittish affair, so heavy like slamming through the floor.  Then there was a pop at a certain American hardcore band in “Destroy Everything By Hatebreed”. This ominous, a heavy swagger and, aptly, like fight music.

Come “Kill You Back”, it was a riding beat before going completely haywire and a doubling breakdown in intensity for emphatic headbanging.  They then proclaimed “We Own This Place”, aiming to put their own mark upon the venue. That they did with some jazzy drum, a sit down moshpit preluding song proper and even a sit down crowd surf. Closer, “Everything’s F*cked”, was a suitably unceremonious end to the set.

Kryora, the Invernessian three-piece metal band, demonstrated a sound big despite their size.  This was the chugging excitement of thrash with an immediate sort of epic, doomy riffage.  Powerful drumming, industrious.  Kind of dragging heels, badass attitude.  Even when slow, they were intense.  A couple of covers, Luke Lockley as guest guitarist, “Creeping Death” by Metallica and “Domination” by Pantera, were also definite crowd pleasers, too.

After that, the mighty power of Drekavac.  These guys were a blackened death five-piece from Aberdeen and, from the off, didn’t mess about.  “Darkspire”blasted pure hatred.  A section was brooding, yet still imperious and maniacal. “Chthonic” was bleak and frenetic, inspiring a circle pit and the drums building to a cacophonic crescendo.

“Incipit Demonas Pandorum” began moody, then starting proper with knifing drum. Tremolo riff blackened to the heart. Despair then took hold, inspiring the dark impulses of the crowd, thrashing amongst themselves.  To fight.  This suitably preluding “Genesis Of Darkness”, dramatic with drums like a smiting hand.  Abrupt and unceremonious.

The “Heirophant” reared its bloodied head, next.  This had vocalist, Hyperion, screaming from the top of a table some distance from the stage, sound engineer wincing and practically with his head in hands.  Latterly the track had horns in the air in tribute to its really sinister riff.

Its head obviously left a trail, come “Shadows In The Blood”.  Slow, doomy. This then came thrashing with some venom.  High pitched screams, murderous. Older track, “Abomination Of Flesh”, cut swathes with its frantic riffing, the height of despair.  Then silence. Things pared back, only to turn the dancefloor into a killing field.

Now that the night had advanced, people figuratively howled for the “Deadmoon”.  This track greeted with ambience, only to be obliterated. Closer, “Entrophy”, had galloping drum inspiring a circle pit.  Clawed hands proclaiming spite and hatred.  “Drekavac, Drekavac” after the last track showed the crowd wanted more.

Headliners, Forres’ Civil Punk, a punk rock, black metal and hard rock hybrid three-piece.  They were Ross McFarlane as vocalist and bassist; brother, Lewis McFarlane, as drummer and Luke Lockley as guitarist.  Both Ross and Luke in the aforementioned Section 9, too.  There was an intermission before they came on, explaining the mountain of work staff, organisers et all did to put this thing together.

When they did come on, it would “Burn”.  It had a punky energy and attitude. Biting, immediate bass.  Wild yet tasteful soloing.  Grooving hi-hat giving a jaunty kind of groove.  Flashy bass at that, too.

Second track, “Paper Dragon”, was slow, ponderous and despondent.  Like a winged serpent without fire to breathe before the song kicked itself into stride. Bass underpinning as they guitar ventured into solo.  Sudden, wild tempo change.  Tempo to tempo without missing a beat.

“How the f*ck you feeling tonight, lads?”

Finally, the fire returned but has said dragon burned itself in the process of “Burning Paper”?  Hard edged, metal riffing.  Some seeming Black Sabbath in there, too.

“…and one, two, three, four” into the grooving bass of “Walking Speed”.  As short and sweet as its countdown.

“Taps aff,” the now half naked frontman, Ross McFarlane, proclaimed. Swaggering “Brand New Phone” and bluesy, too, to some extent.  Wistful and despondent.

“Bonzo Goes To Bitburg” an ode to a late pillar of the Forres music scene, a true punk.  Ringing, reverberating.

“Right On Cue” fast and unrelenting.

Winding down to the latter part of the set, and “We’re Not Gonna Take” it by Twisted Sister helped bring the party to a satisfactory almost close.  A staple of their live set.  Hook sung passionately by the crowd, and aided by cowbell.

After this was a brief dalliance with Queen staple, “We Will Rock You”, with a guest on slap bass.

After this were announcements of plans for a bright future, various gigs, releases and so on.

Overall, an excellent night.  Value for money whether you paid £10 to take in the previous night, too, or just one of either night for £5.  Either way, totalled by twelve bands both nights, or six bands either night, equals peanuts.  Thanks must go to staff, the sound engineer and help at Eagle Bar plus organisers ForresFest, Gloomlurker Promotions and More Gigs 4 Moray.

Review of Friday can be found here