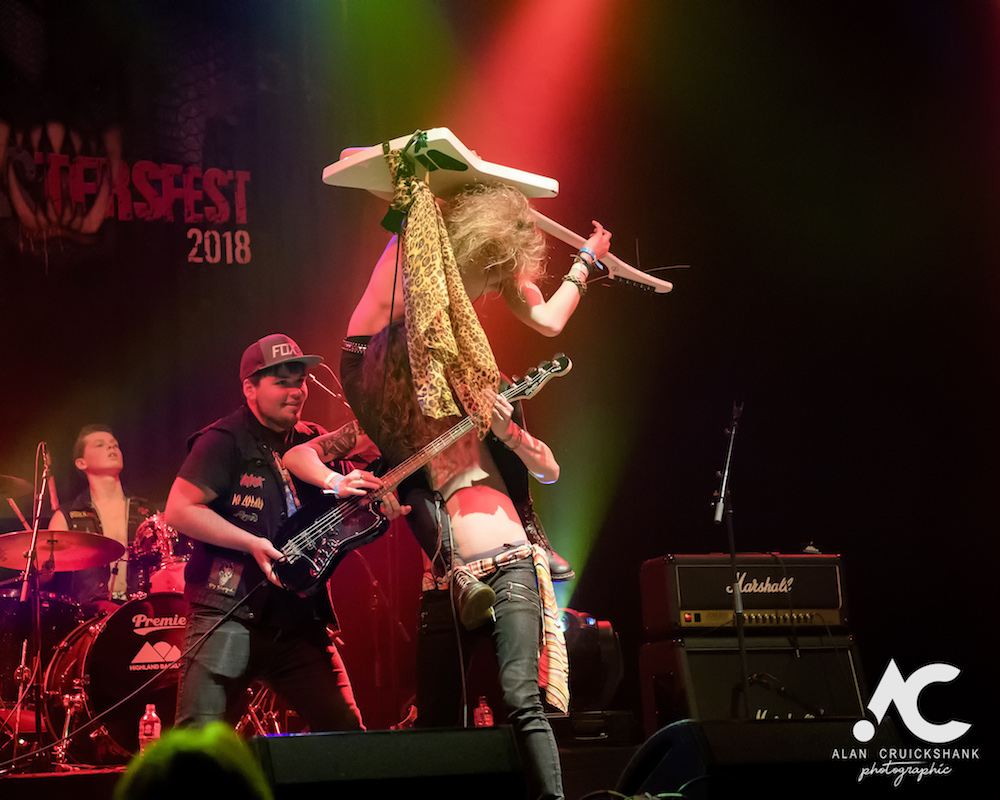 This month sees Bad Actress release their EP ‘Low Down and Dirty’, along with a clutch of shows to back it up.

Formed in 2016, this youthful band (drummer Lewis was just 12 back then!) look to bring back the fun loving live gig atmosphere of the 80s, taking it to the modern era and injecting some adrenaline fuelled stage antics while they do it. Those 80s influences are not just how they are developing their stagecraft but also in their songwriting influences citing such luminaries as AC/DC, Motley Crue and Aerosmith.

Current line up consists of lead guitarist Struan McFarlane with, on rhythm guitar, Thomas Bell. Lewis McFarlane is on drums and Ross MacFarlane on lead vocals. The final piece in the jigsaw was the addition of Gareth Mair who joined on bass guitar following a Market Bar gig, and following a run of various bass players.

Bad Actress have taken shows across the Highlands, through Moray and to Aberdeen where they triumphed in a Battle of the Bands, and with the prize that went with it saw them spend a day at Captain Tom’s Studio where they laid down the ‘Low Down and Dirty’ EP tracks.

They’ve opened at the Ironworks for Cobalt (now King Cobalt) using their previous moniker ‘Airrade’ in February of 2018, and later in the year they returned to open the first day of ‘Monsterfest’ also at the Ironworks.

The EP ‘Low Down and Dirty’ is released on 7 March and is a collection of the band’s original material that has held them in good stead in their all action shows.

Going hand in hand with the release are four dates starting with The Green Room in Perth on 8 March with support from The Hunt, followed on 9 March with a show in the Eagle in Forres with Table For Four kicking off for them. 15 March sees them visit the Star and Stables in Nairn bringing along Buzzkilt, and a week later on 22 March you’ll find them in Inverness at Mad Hatters with The Hunt joining them once again.

They promise high energy and a good time, so what are you waiting for?