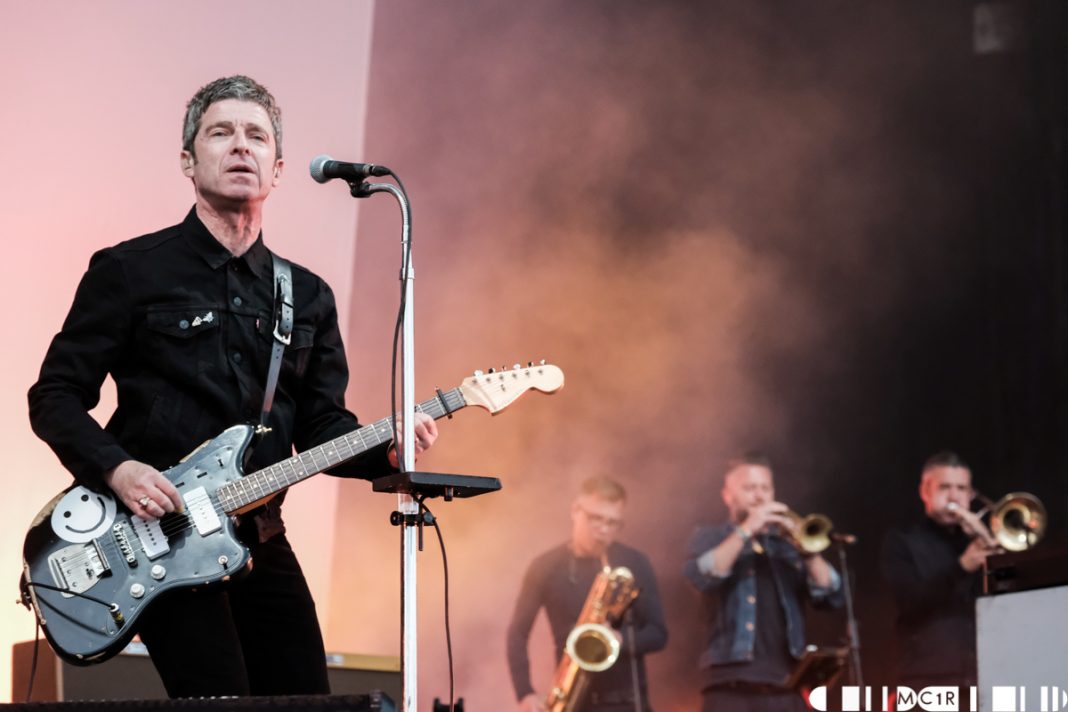 Check out our pictures of the evening

Noel Gallagher playing Inverness still feels quite surreal and much credit must go to LCC Live for pulling off a massive coup in signing the Manchester legend for the Highland gig.

First on the stage was Lional, Inverness through and through; shoutouts to the “Hilton Mental Crew” and a moving dedication to  Liam Colgan certainly affirmed this.

Lional’s opportunity to showcase their talents to a large audience went unwasted, with Joshua’s voice being described as mesmerising from one audience member new to the band. Recent release ‘Daylight Hours’ and brand new ‘Sex and Death’ draw comparisons to Two Door Cinema and Circa Waves. It’s a strong and consistent performance from the guys, no doubt resulting in a few more anticipating that debut album. Read our interview with the band here.

Next on are Neon Waltz, who also hail from the Highlnds, sharing management with the headliners, and subsequently were an unsurprising choice to join the bill.

Jordan Shearer orchestrates proceedings well, much to the joy of the growing partisan crowd. They manage to mix a sound that harks back to the 80’s and 90’s Manchester scene whilst retaining a more contemporary footing. Last song, ‘Dreamers’, sees Jordan sing closer and a little more softly into the mic and it feels as if there is a conscious decision to let the audience do the work and they are certainly up for the task.

11 years ago to the day, Razorlight headlined Rockness, a performance that was full of energy and, in hindsight, saw the band at the top of their game.

The 2019 version of the band were able to match, even compete with, their former selves in a set that was shoved full of their hits. It became notably busier in the arena; the singing became significantly louder and the bouncing a bit more chaotic perhaps in response to the change of pace that the band offered.

From Heaton Park to Bught Park in 24 hours, Noel Gallagher’s High Flying Birds entrance was preceded by a Man City board being loaded on the stage.

As the band form on the stage it is the three piece brass section that comes as a bit of a surprise, but they are put to full use from set-opener ‘Fort Knox’ all the way through to Beatles cover ‘All You Need is Love’.

In general it feels that Noel is in surprisingly playful form; whether he is describing the front row of the audience as “Holding pen for the Jeremy Kyle show… Savages” or being brutal (or brutally honest) about ICT “they’re shit even in Scotland”. It’s nothing more than banter and leaves me feeling that all Noel wants is a big hug.

With newest track ‘Black Star Dancing’ Noel emphasises his desire to push boundaries and evolve (but certainly not ignore) from his past glories. Noel’s inability to get his his head around the lack of darkness that Inverness has verges on hilarious despite it messing with “the drama” of ‘The Masterplan’.

The Oasis back catalogue, or as Noel describes it, “the karaoke session”, is given priority during the latter part of the set. Whilst there is no traditional encore, it feels as if the decision is to “get on with it”, few are disappointed with this approach, instead it allows the momentum to continue to it’s finale, a singalong to “All You Need Is Love”. “Inverness, you’re f***in’ amazin’” Noel said at one point, a fitting conclusion.

The elephant in the room, as it was at The Gathering the week before, were the queues for alcohol. In fairness, for a few of the audience they could have done with a wee bit less, not more. However any issues with beer can be countered by the fact that Noel Gallagher played Inverness (it’s still a bit strange to write that).

The Noel Gallagher’s High Flying Birds gig was first on the bill of ‘Live in the City’ organised by local concert promoter, LCC Live, in Inverness this summer which includes Skipinnish (5th July 2019), The Proclaimers (6th July 2019), Kaiser Chiefs (16th August 2019) and Madness (23rd August 2019). Tickets for all the gigs are available from Ticketline (www.ticketline.co.uk; 0844 888 9991).

Read our review of Razorlight at Belladrum 2014;