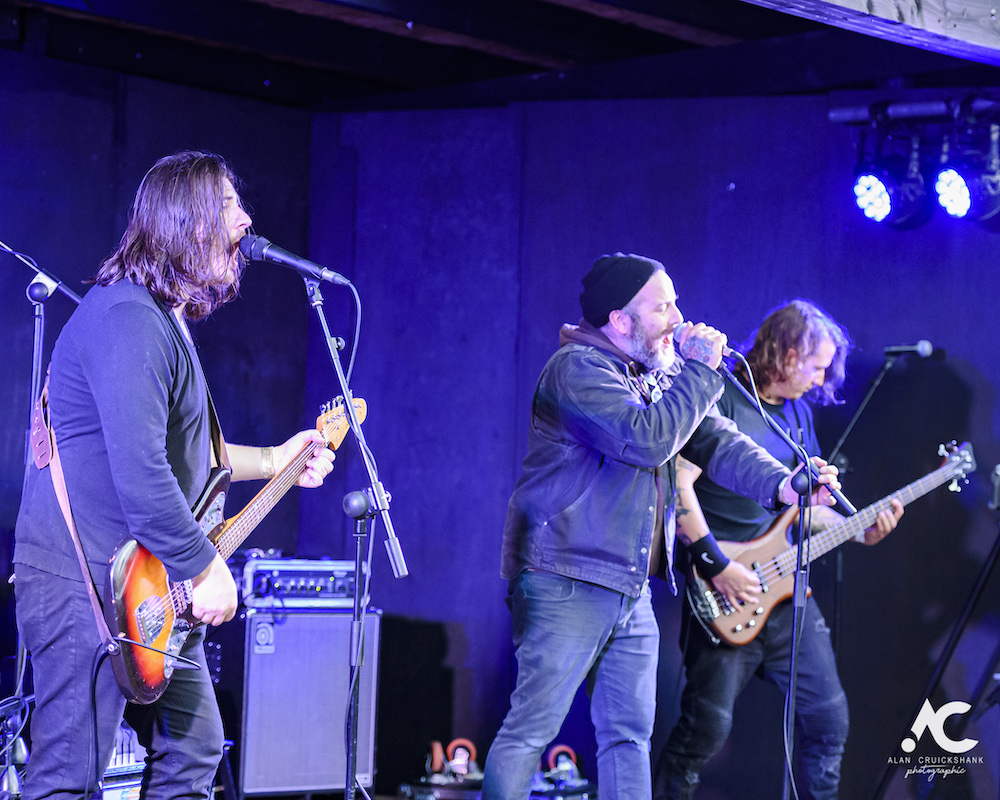 On my travels over in the car the heavens opened and I had that ominous feel of a wet day. Fortunately, it cleared as I got to the car park. As we entered into the woods I found an old mining town straight out of a Western.

As people arrive it feels quite a cosy affair, compared to most other festivals, with its built-up area and tall woodlands, it gives a sense of not being at a festival at all. As you walk through the trees you come upon the mainstage with food vendors (including ribs that would have made Fred Flintstone envious) and a bar. Through a corridor you come across the other stage the Haybarn with its own gin bar at the far end. A woodland walk takes you to the comedy stage and as it’s a family affair you could find different activities for the kids in the out houses

The day starts off with an acoustic set in the Haybarn as Canadian artist Orit Shimoni is accompanied by Hamish Roberts. The pair work well with acoustic guitars and are in absolute harmony. ‘Just Because’ from the album ‘Bitter is the New Sweet’, is a “this is I’m so sad I left him song” rather than the more typical narrative about women being sad that ‘he left me’. Orit has a deep country vocal style which complimented her songs telling stories of her travels of life and loves.

Andrew Still has a different start with quite an upbeat start to his set. ‘Just the Curse I’ve Got’ is a drinking song that starts with that a feeling of plodding on your horse with a nice, folk style vocal. He is joined by Sophie Bonadea for ‘Fighting Talk’, which is quite a fun spat-song between the opposite sex

I always look forward to hearing Kris aka Dr Wook, he has a smoky modern folk-rock vocal style as shown in ‘Are We Crazy’ which is well received by the audience. His laid-back style is evident in ‘Goodness Gracious Good Night’, so much so it floats and you could easily imagine it as a lullaby.  Onto ‘Down the Line’ which has a running bass line like a deep south train and a sense of foreboding that goes with it. A nice broken-down cover of ‘Time after Time’ had the crowd singing along with Kris and he finished with an upbeat tune called Not for Me.

After the acoustic sets at the Haybarn, a range of DJs were enlisted to continue, but I was off to the main stage where the music continued on with an acoustic set from Sophie Bonadea who we had seen earlier with Andrew Still. She has a strong familiar folk vocal of the likes of Joni Mitchell – very good indeed.

A very different kind of set from Josh Mackenzie, it was an interesting piece with his solo electric guitar and he gives the audience a wee treat with a cover of Out of time. Josh has shades of Paul Simon through his vocal or even The Vamps. The Smiths song ‘Ask’ plays to Josh’s strengths with Eighties style electric guitar and fits his vocal well. I felt his set was shouting out for a full band behind him which would have brought a really great set to something a wee bit special.

A total different pace was set as The Malts took the stage. The five-piece band from Maryburgh are a rocking indie band and almost a shock to the senses as I adjust from the laid-back morning. The Strokes come to mind as they play ‘Don’t Employ Tommy’, it’s a poppy number. Frontman Teddy has got a swagger with his phrasing which the band style emphasises. A vibrant change music for the afternoon.

Big Bob’s Blues Band was a crowd awakener with lots of folk coming up to dance along with classic blue songs. The mojo is working with big blues solos with Bob’s guitar a big part of the show. Although we have seen some great artists already, this is band that brought the festival to life.  Half way through the set a young couple from Avoch got engaged with a Bad Girls bakery donut used as an offer of engagement! Gill Naisby and  Gary Taylor who were childhood sweethearts, said they will return for their wedding. Finishing with a great cover of ‘Born to be Wild’, the audience responded well to the set and it finished with real regret that it was over.

The Teuchter’s Comedy Club hosted a stage in Santa’s grotto.The acts clearly left mixed feelings with punters and at times the comedians had to work hard for their laughs.

The Galipaygos open their set with ‘Open Water’ and are a fun rock and roll band with some smashing harmonies which leads to a  toe tapping extravaganza, ‘Ploughing On’ is a good rock and roll song from one of Andrew’s collections of drinking songs.

I hadn’t really known what to expect from Iain McLaughlin and the Outsiders but was delighted to a full out rock with set a touch of grunge that brought me back to my youth. With a quiver through the first song giving it dramatic effect as Iain’s deep rock voice and screaming electrics brings a strong opening. ‘Falling Through the Dark’ the electric guitar riff has the creep of a wild creature prowling through the deep night while ‘Rise and Fall’ felt intense and filled with stress and drama. Dr Wook joined them on set for a tune but was plagued by mic problems and was difficult to make out which was a shame.  I look forward to catching them again in the future.

By the time that Iain McLaughlin and the Outsiders were on stage the families had started to leave, leaving a smaller crowd. But those who were left were there to get down and groovy to a bit of motown style pop funk with James Brown is Annie . The fresh sounding 6 piece from Edinburgh are slick with some smooth sax solos and electrifying guitar runs and uber cool vocals. the kind of band you just can’t help but dance to!

Woodzstock is a wee festival with the potential to grow (but not too big, please). It’s fun and friendly and it is great not have to queue for the facilities or beverages like the bigger events. It would be great to get the support it deserves and to get more use of its stages with a bit more diversity. We will be watching out for future dates with interest…

More photos of the event;