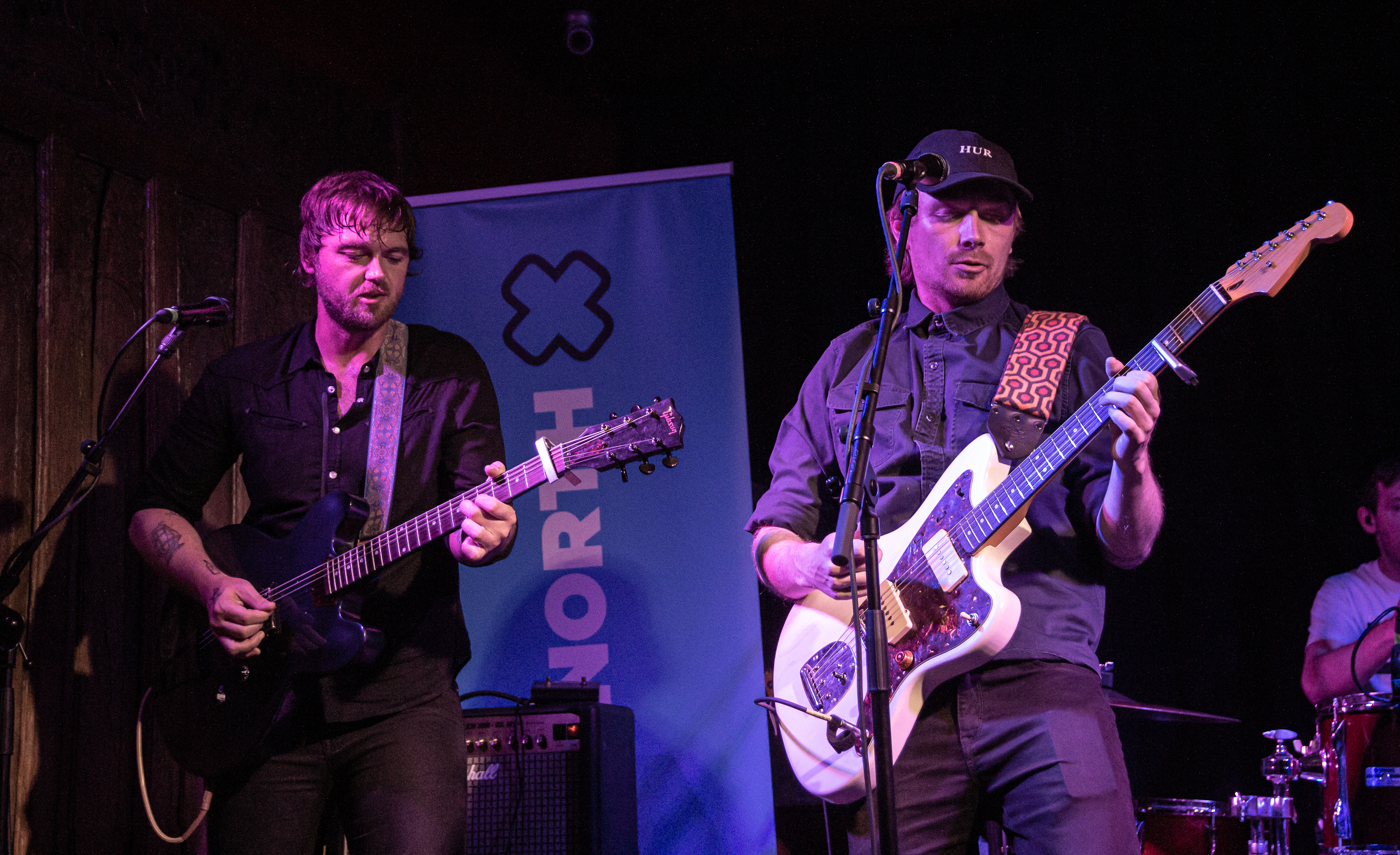 We look at the XPONorth showcase in Inverness

There’s a point during Thursday that I have to pause and take stock of the bands I’ve seen and the bands I’ve yet to see. XPO North tends to be a blur of seminars and workshops during the day, the showcases in the evening and a smattering of networking and catch-ups with people you haven’t seen last year despite the promises that yes, of course we must get in touch/work together/collaborate on that bit of music or art… it means that there’s a tendency to be dragged along (especially if you’re writing about it) rather than really enjoying the experience.

This year was no different but I was determined to enjoy the experience and rather than painstakingly plan out every band to go and see. I took a pot luck approach to checking the bands out and wandered between venues to see what caught my ears.

On Wednesday evening the first band to draw me in were Moonlight Zoo who delivered one of the best sets of the showcase. The band commented that it had taken them a few years of applying to play at XPONorth but they were pleased to have finally made it. They grabbed the opportunity with both hands and the Hootenanny crowd were treated to bright, summery pop-punk reminiscent of bands like Weezer. Worthy of a mention is their guitarist and backing vocalist Jamie who has an incredible set of pipes on him, it’ll give any Bee Gee a run for their money!

In the Ironworks Broken Chanter were lamenting a review where the writer accused frontman David MacGregor of being a ‘frustrated comedian’ leading him to wonder whether his between song patter was that bad. Music-wise they play moody atmospheric rock and any dodgy banter is balanced out by the quality of the music on stage. They’ll make a return to Inverness in September to play the Tooth and Claw in support of their new self-titled album released on Olive Grove Records on September 6th.

Next door in the Phoenix Bar False Friends are a little to earnest and preppy for my tastes. I try not to judge a book by its cover but a predominance of blazers, nicely pressed shirts and an altogether far too clean-cut look strikes me as a band that have thought a lot about how they look but less on what they’re delivering. Musically it’s fairly insipid and doesn’t inspire me to hang around for too long.

Back to Hoots and Quiche are… parachuted in to us from somewhere in the late sixties. Harmonies, dubious hairstyles (my own included!) funky shirts and a Hofner bass are all here. They are bloody good though; the eccentricity stops shy of being too ridiculous and the music speaks for itself. There are echoes of Beach Boy harmonies and newer acts like Rex Orange County. The more a band makes my photographer screw his face up, the more likely they are to be good. Mr S looked like he’d been chewing a lemon by the end of it, well done chaps! He likes bagpipe music which should tell you everything you need to know.

The Penta Hotel usually hosts the mellower artists and I’ll know to retreat there if I need a little space to breathe. Scattered with comfy sofas and an artificial fire surround, it is a nice spot to take the time to catch up on notes and check out some of the more thoughtful acts that play XpoNorth. Cara Rose is on when I arrive and her powerful jazz vocals are an immediate draw. The songs are for the most part fairly somber but it’s broken between each song with a broad smile and enough humour to balance it out. Check out ‘In My Head’ and try telling me that it doesn’t give you goosebumps!

The Sea Atlas close off my Wednesday night over in Hoots and give our ears a final battering before heading home for the night. The project is led by Calum Buchanan from Uig on the Isle of Lewis. Calum is in the merchant navy and the mood of the sea along clearly influences his music. Before closing the set, he says, ‘I’m a ship’s master, so after this gig I’m off back to my boat to go and shout at some deck hands’. Not something you hear every day at a gig! ‘Ripped jeans’ is the final song of the night and a storming tune to close it all off. Hopefully his travels will be a little calmer.

On Thursday Calum Jones bursts into the Market Bar and immediately gets heads nodding. He’s a charismatic performer and even the older stalwarts of the Market seem to want to get in on the action. It is a great way to start the night things are off to a promising start.

UKKÜ in Mad Hatters are about as ethereal as it gets, dreamy spaced out pop music with little keyboard meanderings reminiscent of the Doors. Hatters can be a tough space to play in but they get a smattering of appreciative applause from those who are paying attention.

Chuchoter (pronounced ‘choo-cho-tey’ I think!) had been flagged up as a band that I needed to go and check out. I duly popped over to the Ironworks to catch the set by the Edinburgh-based duo. Citing influences from electro pop to soul they capture a sound that sits nicely alongside bands like Chvrches but also the bigger hitting vocal stylings of La Roux.

Solareye will be known to many as the frontman of Stanley Odd and, as you might expect, he doesn’t stray too far from his usual line of social commentary. The rapper is as astute and funny as ever and slightly older, wiser and more tired than when we last saw him having had a new baby to contend with. His musings on that certainly rang true with many in the audience. Our photographer exclaimed ‘rap FFS!’ which on our litmus test of how good an artist is, would put Solareye at the higher end of musical quality

Savage Mansion were nearly dismissed as ‘yet another bloody indie band’ but we quickly realised that this was far from accurate. Hints of Pavement, Devo and Mudhoney and a frontman who looked he was on the brink of losing it any second, gave us an electric half hour of music. They made a real impression on the audience with one American tourist bemoaning that they should have been on for much longer.

Finally, in Mad Hatters Whyte had a challenge getting anyone to pay attention. As people began to drift away they initially struggled to make an impression, but slowly the audience began to switch on that they are doing something a little different. Alasdair Whyte sings traditional Gaelic tunes over a background of electronica and slow beats generated by Ross Whyte. Eventually the chatter at the bar dies down as people switch on to what the band are doing. It’s an interesting and ultimately absorbing set. Gaelic trad music and artists are sometimes in danger of having a stick up their arse and it’s truly gratifying to see someone trying something different. It flits between haunting, chilling and ambient with each song and there’s even a hint of gothic menace at times. My only note of criticism is that Alasdair could do with having a little more stage presence but I’m sure that’ll come with time.

XPONorth has built a reputation of being the place to be if you’re involved in digital media, music and arts. This year a Canadian contingent had made their way across to launch a £200,000 grant towards funding trips to Canada to network or liaise with artistic groups over there. Good luck finding any info on it at the moment though. There are no details on the HIE, Creative Scotland or XPONorth websites or socials despite the announcement on Thursday evening. I can only assume there will be press releases out later this week to announce it to the wider public.

On the whole XpoNorth did feel like it wasn’t overly keen on promoting itself and I wonder whether there is an issue with funding and even if the festival has much of a future. The line-up of speakers during the day was impressive, including an Oscar winner, Record label execs and the Chief Operating Officer of Times India Music. These people garner huge audiences but some of the sessions were very quiet. In terms of promotion the XpoNorth socials were worryingly quiet and there was little in the way of updates on either Twitter (other than a lanyard grumble), Instagram or Facebook.

I wasn’t the only one to query whether the heart was in it anymore and if we’re beginning to see the beginning of the end. That would be a crying shame, the festival is always one of the highlights of the year and it brings networking opportunities that we would otherwise have to travel to the central belt to get.