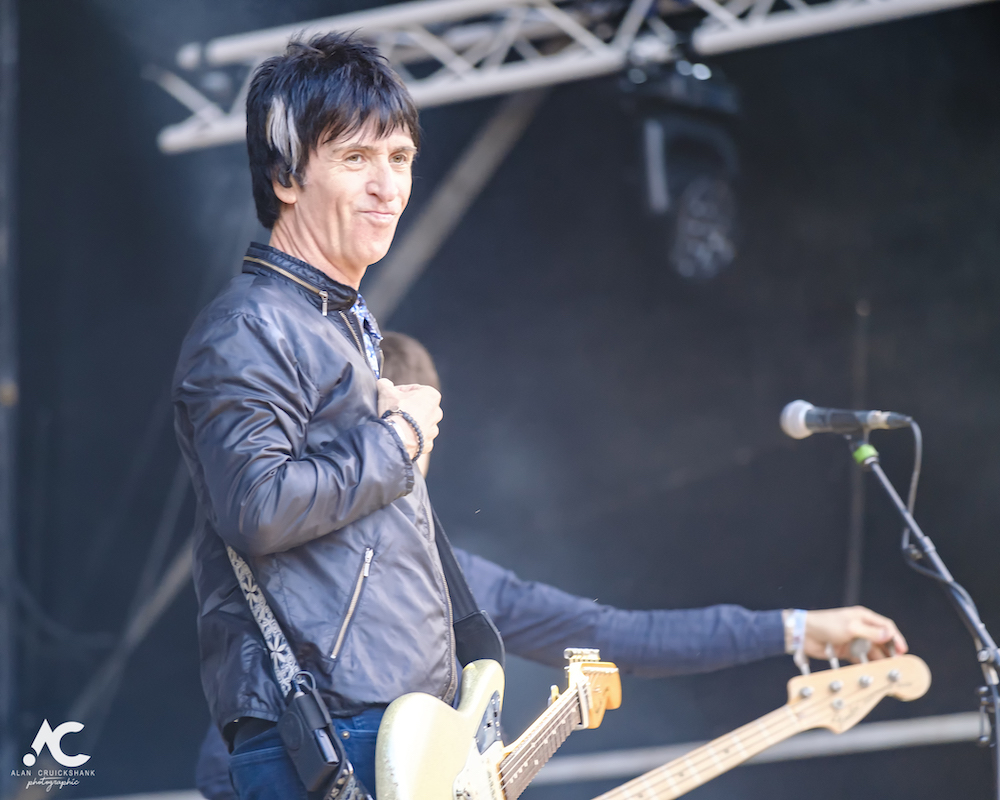 It looked like the weather had got the memo and Friday started off with blue skies once again. First stop was the Seedlings Stage where The Dihydro were in place to knock the cobwebs off anyone who had overindulged the night before. Having been at the inception, so to speak, of the Dihydro at a Battle of the Bands comp at the beginning of the year it was good to see them progress onto a festival stage.

A post shared by Alan Cruickshank (@alancruickshank.photographic) on Aug 3, 2019 at 1:04am PDT

Distorted vocals and power set to overdrive is their signature and this dirty, angry set was just the way to kick off Friday. The even have a snarly political song in which they share their lack of love for Nigel Farage. It was a quality thirty minutes with stickers thrown in for good measure.

Hot footing it to the Hothouse Stage it was an opportunity to catch Edinburgh’s Vistas who were already rattling out a guitar heavy indie pop set to a very full tent. Lead Prentice Robertson has confident delivery and great crowd connection and their uplifting sound brings a whole new following. There is a bright, breeziness to ‘Eighteen’ and with ‘Calm’ they ask the audience to help them out if they know it, and they do!

Rounding off with ‘Tigerblood’ they leave their fans energised, except maybe those that formed a mosh pit at the front… Their jaunty set no doubt endeared them to a fair few new followers in a congested marketplace for their sound but with a heavy touring schedule and hard work it will at least give them a crack at taking it to the next level.

What makes Belladrum special is those little pop up performances that appear every now and again. Wandering past the Tomatin Bar a group of musicians were striking up an acoustic set with a reggae/ska feel in a folky accordion style if you get my drift. I believe it may have been the Fonsecas but happy to be corrected, but really just happy have stumbled across this performance.

Back at the Seedlings Ivy Flindt have made their way from Hamburg to deliver their synth led set. When accompanied by acoustic guitar it gives a chilled Mediterannean feel perfect for a sunny afternoon. The atmosphere that they create is reminiscent of Emmy the Great and it was a great interlude before the madness that was to ensue in the Hothouse.

All action King Nun hail from London and set about tearing a new one in the Hothouse with their screaming guitars and kicking bass. Their approach is quite direct; it’s a full on, in your face with a no prisoners taken perspective. There are deep melodies hidden in there which surface between the cracks in their noisy exterior. Although the set settled, as much as it could, to a more melodic approach those hard but not rough edges shone.

Frontman Theo contorts, twists and throws himself about a bit, just what you would expect from such a charged environment; he even takes to running through the audience at the end of the set. Great energy and an album out in October. One to watch out for.

Johnny Marr with low slung guitar strides onto the Garden Stage with a sense of purpose and launches into current release ‘Armatopia’, but it wasn’t just a set of the modern but a crowd pleasing set that spanned his career and the generations in the audience. Johnny proclaimed during his performance ‘the weekend does start here!’ and he wasn’t wrong for many who had eagerly awaited his appearance. “Bigmouth Strikes Again’ was a precursor to a number of the Smiths’ songs where he had a credit in their writing.

The unmistakable guitar intro of ‘How Soon Is Now?’ set the crowd off and later songs in the set, ‘This Charming Man’ and ‘There Is A Light That Never Goes Out’ had his vocal tilt towards Morrissey in it’s twang. ‘Getting Away With It’ his first single with Electronic made sure it was a crowd pleasing festival set. (More of Marr here)

Moving away from the main stage I came across Ezra knocking out some well honed covers to a packed Bella Bar, from Adele to Fleetwood Mac. Belladrum does have something for everyone, even those that can’t tear themselves away from bar…

Headlining in the Hothouse though were Glasvegas. I don’t often venture to the front at a show or festival these days but this was an exception, and once they struck up with ‘Flowers and Football Tops’ my notebook was put away in my pocket only to briefly come out as a few short words were scribbled. This was a set to be absorbed as they moved effortlessly from song to song, from ‘My Own Cheating Heart’ through ‘Euphoria Take My Hand’ to ‘Daddy’s Gone’ and all those in between. Special mention for their cover of the Ronettes ‘Be My Baby’ and more so for their reminisces of the Raigmore and the acoustic sounds of ‘Whitey”.

They may not be everyone’s cup of tea but James Allan’s vocal and the soaring guitars tick all the boxes for me and ending it with ‘Lots Sometimes’ was about as perfect an ending as you could get. If I had a gripe it would be that I just wish it was longer. But as they say you can’t get too much of a good thing…