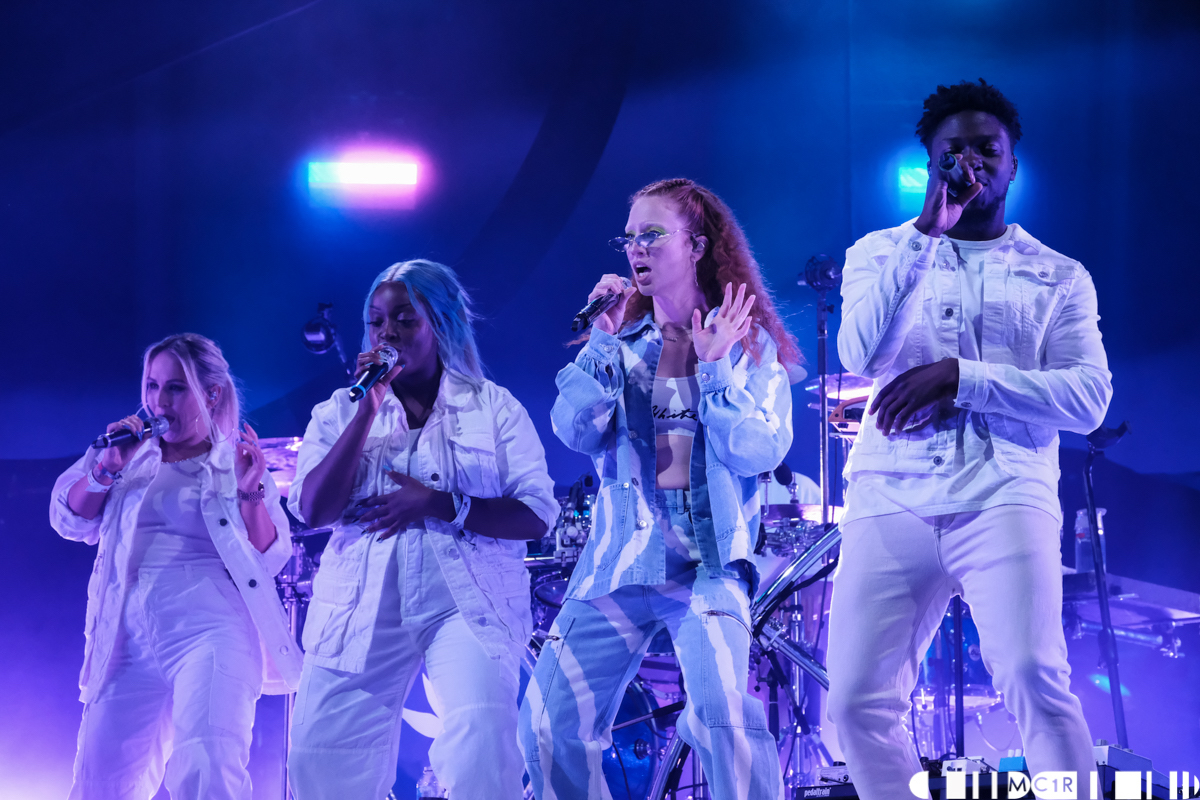 My first three acts I caught were in the Hothouse and a very diverse mix they were. First up was Be Charlotte. This is not her first appearance at Belladrum and when she made her debut it was with an acoustic guitar.  Now it is very different with a more confident Charlotte bouncing onto the stage embracing a more commercial, and festival friendly, sound. It is fresh, bouncy pop with no airs of pretension.

She still retains her distinctive Scottish accent but sings with greater purpose and, you could say, visible enjoyment too. She commanded an audience and when she asked them to singalong to ‘Set Somebody Free’, not only did they sing, they swayed, they clapped and a whole lot more than was asked. Performances like this are the sort that should act as a springboard for Be Charlotte.

PAWS may not be bouncy pop but they know how to invigorate a crowd. Their customary rawness may have had a few heading to the exits that had hung around after Be Charlotte but with the release of their new album ‘Your Church Is My Bonfire’ has seen a change in direction to a more accessible, certainly for a festival crowd, sound. It still packs a meaty punch, and stand ins Ross and Colin are fully versed in their roles even down to an understanding of the Tain lingo.

More considered and melodic,and somewhat stripped back, it delivers and when they mention they are playing ‘Joanna’ they receive a few hollers from the growing crowd who hung around to the end of their set which did of course require every last ounce to be thrashed out of their instruments before departing.

Third act on the trot for me in the Hothouse were The Ninth Wave. A tough one to pigeon hole The Ninth Wave comprise Hayden and Millie both on guitar and vocals with a band to back them. It’s bleak yet uplifting, stark yet busy. It’s a superb collection of contradictions with a more than a touch of drama and theatre inserted by, an at times, aloof Hayden. The sharing of vocals gives a balance and counterplay. ‘Used To Be Yours’ brings out the best in Millie, it’s less brooding and more in a Chvrches mould, whereas ‘Swallow Me’ allows Hayden to indulge. The Ninth Wave are quite special, and this was quite a special performance.

Down on the main stage the crowd was growing as The Selecter arrived on stage. Pauline Black was well pleased with the turnout of her three minute heroes. It’s a well honed set with Pauline and Arthur ‘Gaps’ Hendrickson keeping it on a roll linking each song through their narrative. 2 Tone ska felt at home at Bella and although the growth in the crowd may have been linked to the young whippersnapper who was appearing next those that joined down at the front skanked along at the journey through ‘Missing Words’, the ‘Train To Skaville’ and the meeting with ‘James Bond”. The crowd were well and truly set up by the end which was nicely rounded off with ‘Too Much Pressure’.

It was very telling at the end of The Selecter’s turn that moving away from the stage you were very much going against the tide as a further wave were getting in place for Lewis Capaldi. I was to be elsewhere but did catch him from the very top of the hill, with the help of the screens, the start of Lewis’s set, with about 15,000 in front of me.

With the ensuing mayhem behind me I headed for the Grassroots Stage and singer songwriter Scott Matthews. It may have been less than packed as he set up but the crowd slowly grew as the set progressed. Scott has an innate knack of being heartfelt, not just through his vocal in opener ‘Mona’ but also through his connection with his guitar. He is an unassuming musician, somewhat self-effacing but this masks his ability, such as in ‘Drifter’ as he is able to express in his voice more than just words.

Accompanied by only a djembe player this is pure and effortless, or at least made to look that way. The mellowness is appreciated after a long day and he steers us through a well crafted collection of songs rounding off with ‘Passing Stranger’. This was a master of his craft at his work. He doesn’t have to shout about it, he just plays.

While I’ve been away from the main stage Lewis Capaldi has come and gone and Jess Glynne has already kicked off as I jet to (see what I did there) the arena and I must admit I was a little concerned that there could be an element of after the Lord Mayor’s show about it. But fear not, a slightly less packed but still very busy Garden Stage, had welcomed Jess and she was putting on a show.

With her band and backing singers it was a well choreographed and well planned headline. The backing singers in particular set up ‘These Days’ for Jess to take it up a level. The younger audience knew all the words and with the likes of ‘Thursday’ sang along with their full voices. A bit of pyro accompanied ‘Real Love’ a precursor for the post festival fireworks, and this signalled that the evening was drawing towards its last few numbers. A final encore and Scotland’s largest festival (with camping) once again drew to a successful conclusion and also cemented its place as a full fledged three day festival.