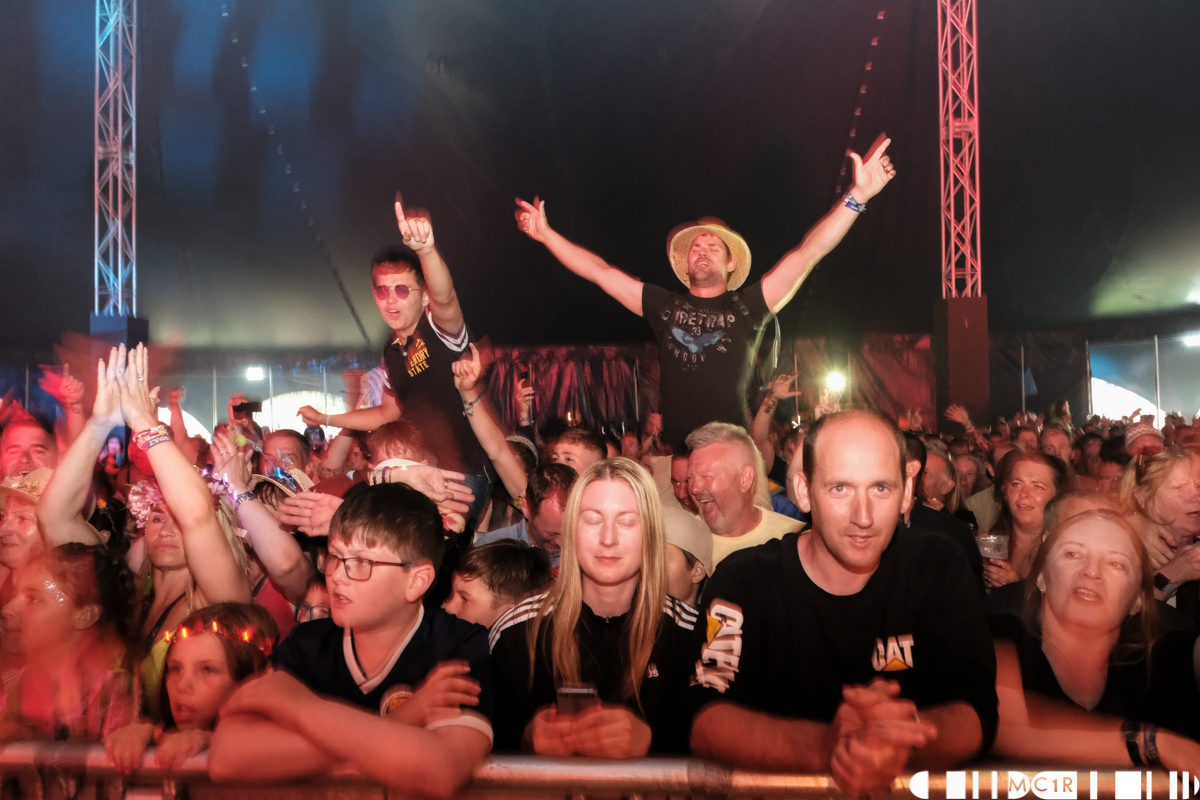 Day three of Belladrum and as the sun continues to shine one of the stewards is taking the time to warn everyone entering the site to drink plenty of water. It’s a display of thoughtfulness and consideration that sums up the atmosphere and ethos of the festival. There’s been some concern that the full takeover by Kili Live would have a negative impact on the festival and that the family friendly feel would be tainted but so far there’s nothing to be concerned about.

It’s a quiet start and the focus, either by accident or design, appears to be on solo singer-songwriter types who are all attempting to emulate the Ed Sheeran/Jake Bugg sound and there’s an awful lot of overwrought young chaps hunched over acoustic guitars. That is until I come across Aaron Smith in the Seedlings Stage. I nearly dismissed him out of hand but after a pause for consideration I quickly realise that this chap has an impressive voice – a touch of the Sam Smith – and he hits some lofty high notes. It’s genuinely passionate, heartfelt and believable. A lot of these artists are spouting trite faux-angst nonsense but Aaraon comes across as credible and talented to boot.

Maisie Peters down on the Hothouse is another artist not catering to the forty-something market. That much is apparent by the host of teens chanting ‘here we fucking go’ down the front. In a similar vein to Dodie with chirpy pop tunes and messages ranging from dealing with depression and her sister’s ex-boyfriend. She’s mightily impressed that everyone knows the words to all her songs and gives them a 10 out of 10 for being in tune. This is her first festival visit to Scotland and I suspect it won’t be the last.

Later in the Hothouse Stage Self Esteem have the misfortune to run into a clash with Lewis Capaldi who starts towards the end of her set. With the masses converging over on the Garden Stage in huge numbers the other stages were left markedly quieter. Championed by BBC 6 Music, Rebecca Lucy Taylor’s new project and tracks from the debut album ‘Compliments Please’ has had a fair bit of airplay over recent months. Opening with lead single ‘Rollout’ and flanked by two dancers decked out in red with ‘believe women’ printed on the front it’s a powerful and compelling set, as much a performance piece as it is a gig.

As with Slow Club, she has a habit of picking you out from the crowd and pinning you to the spot with a particularly fierce stare. It’s a real shame that there are not more people here to witness one of the highlights of the weekend. Fierce (again) RNB pop music delivered by an artist determined to do things on her terms, do try and catch them if they’re playing anywhere near you.

In regards to Lewis Capaldi, the team struggled to get anywhere near the main stage due to the sheer volume of people who wanted to catch the man of the hour. So much so that all foot traffic and from the arena was halted about ten minutes before he was due to come on stage. This has to be one of the largest crowds I’ve ever seen at the Garden Stage and I don’t recall there ever being a time where the organisers closed it off because it had hit full capacity. Colonel Mustard and the Dijon 5 had posted that their own slot earlier that afternoon had recorded the most amount of people but Capaldi certainly topped that total later in the evening. It was as triumphant a return to the Highlands (following his 2018 Ironworks gig) as he could possibly have hoped for and a little bit of Bella history in the making.

If I’m 100% honest I don’t really get the fuss with Peat and Diesel. But as the token Leodhasach in the team I’m tasked with the honour of checking out their performance down at the Hothouse Stage. Originally, they were to be in the Grassroots tent, but this was moved due to a cancellation. And so, Peat and Diesel play for the first time at Belladrum and pull in one of the biggest crowds ever seen down at that stage. They did clash with Lewis Capaldi and there were a few disappointed people who were torn between the two acts, so I suspect the audience could have been considerably larger if it weren’t for that. Nevertheless, the reception for the band is huge and they are visibly moved and, in their words, shitting themselves.

As to the music, it’s utter nonsense. The lyrics are puerile at best, the musicianship is nothing special, the lead singer can’t really sing and yet… people love it! Even the band themselves recognise that they’re not the most technically proficient players. Box player Innes comments towards the end of the set that, ‘Boydie can’t sing, he can’t play guitar and he can’t write good songs…. I honestly don’t know what’s going on’. They have tapped into something though and I suspect part of it is that folk are tired of boring ever-present depressing nonsense at the moment and they just want a party band to lead them down a different path, even if it’s just for forty minutes.

I mean ‘A Brimful of Sgadan and a Marag Dubh’ is not something I would ever expect to hear sung at a festival, but it’s sung with gusto by thousands of people. Most of whom likely won’t have understood or appreciated the Leodhasaich references. They fuse punk, folk, Gaelic, references to landmarks on Lewis and… apparently that’s the way we do it in the Western Isles. The pluses are that it’s bringing a little bit of Gaelic culture in a non-stuffy way to a wider audience and that has to be applauded. Otherwise it’s utter, unmitigated bloody nonsense. But they’ve sold out the Barrowlands and I haven’t so I guess that is the way we do it on the Western Isles.

I suspect The Coral weren’t banking on having to follow on from the ruckus of the Peat and Diesel set but they still manage to haul in an impressive crowd in their own right. The other choices for headliners on Saturday night being Jess Glynn and Julie Fowlis. I chose the Coral and ultimately was underwhelmed. They’re a good solid indie rock band and I’ve seen them a couple of other times across the country but as a headline set this fell slightly flat. The hits were there, Dreaming of You, Pass it On, In the Morning all made welcome appearances but it felt workmanlike at times. They have beefed up their sound and at times and they sound more like a classic rock band during some sections and this helped up the ante a little. Sadly though this felt like a bit of a damp squib to finish off the Bella weekend.

Fortunately I still had Astrid to go and see and the Seedlings Stage headliners signed off my weekend with a bang. It’s been a genuine pleasure seeing the band return to such a rich vein of form after a few (ish) years absence and Charlie Clark and Willie Campbell are always an engaging and entertaining duo. The sweat is positively pouring off them as they tear the roof of the Seedlings stage and banish any lingering thoughts of heading home.

If you like upbeat and rousing indie rock tunes and glorious harmonies then Astrid are the band for you. The new single ‘Danger Signals’ is the perfect slice of summery rock and drags a few extra passersby to the tent. They’re in great form at the moment and you can catch them again later this year support Edwyn Collins at the Ironworks. This is the perfect ending to my tenth Belladrum and I head home with the single ear-worming in my head.