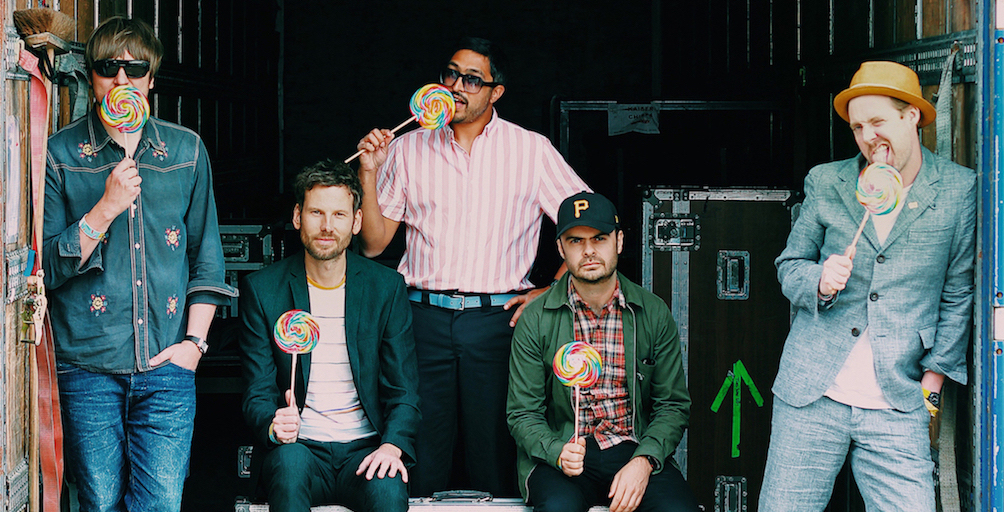 Ahead of their gig in August, Simon Rix of Kaiser Chiefs chats to Morna Ross of IGigs.

What’s that coming over the hill, is it a monster? No, it’s the Kaiser Chiefs.

To be more specific, they’re coming to the Northern Meeting Park on the the 17th August. Of course we had to catch up with the bass player – Simon Rix – to find out what to expect when they head up North.

But first, I was intrigued to find out the reasoning behind the name of their new album ‘Duck’. Which of the interpretations of duck was the album named after?

‘We always have a difficult time choosing an album name, and often in the past we’ve chosen something that’s quite, very well thought out, we’ve got a reason for it,’ Simon explained, ‘We all liked the word, that’s kind of it.’

Simon went on to tell me more about the making of the album; ‘I think it’s one of the hardest records we’ve ever made, for lots and lots of different reasons. It took us a long time. But I think the last record, ‘Stay Together’, we tried to do something a little bit different. We tried to make a pop record, stretch our boundaries and all that kind of thing, and that’s probably why we were keen to come back to Kaiser Chiefs DNA.’

Not only have the band brought out a whole new album, but also released ‘People Know How to Love One Another’ as their first single from Duck. I presumed it was a difficult decision to choose which song would be the single;

‘Ages ago, I don’t know, like a year ago, I was saying to the record company that I thought People Know How to Love One Another should be the single. Just because I think it is a positive statement that everybody needs to hear.’

When songs such as ‘Ruby’ and ‘I Predict a Riot’ are played, they’re usually at full volume and still can’t be heard with all the singing along. I asked Simon whether he thought there were any songs like that in the new album;

‘My favourite song in the album is ‘Wait’, but I think that’s probably the one that will take the longest to learn because it’s got a lot of lyrics.’

Simon had mentioned that he had four gigs the previous day, so I asked what his favourite thing about playing live was;

‘The best thing about it is going to see different places, see the World, get for paid for it, so that’s pretty good. Last night we played Leeds which was nice ‘cause I could walk home.’

He unfortunately can’t do that from Inverness, but seemed excited to come up and play for us all;

‘Whenever we’ve been pretty much anywhere in Scotland it’s always a great atmosphere, so I think when I get an email or a phone call that’s like ‘okay we’ve got some gigs in Scotland’ I’m always immediately just ‘yes, let’s go,’ you’ve always been very kind to us basically.’

If you’re heading to the gig, be prepared for a guaranteed great night. The Kaiser Chiefs will make sure of it;

Kaiser Chiefs will be joined by The Lafontaines and Miracle Glass Company at The Northern Meeting Park on the 17th of August 2019.

The Kaiser Chiefs gig are part the of ‘Live in the City’ gigs organised by local concert promoter, LCC Live, in Inverness this summer which has included Skipinnish, The Proclaimers, Madness (23rd of August) and Noel Gallagher’s High Flying Birds.

Tickets for Kaiser Chief (and Madness) gigs are available from Ticketline (www.ticketline.co.uk or 0844 888 9991)