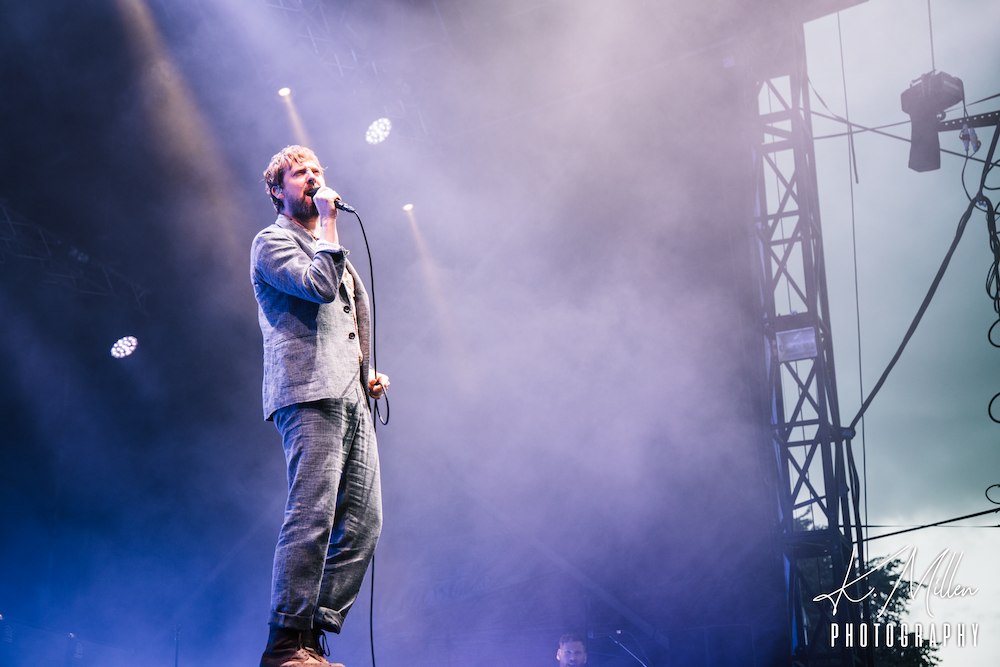 Kaiser Chiefs, with support from Miracle Glass Company and The LaFontaines, at Northern Meeting Park,Inverness.

An unseasonably cold wind swept across the front of the stage at the Northern Meeting Park as Miracle Glass Company took up their positions.

The Edinburgh three piece launched into ‘T.R.O.U.B.L.E.’ as they set about warming the early arrivals. Austen George on guitar, William Douglas playing bass and Andy Duncan thumping the drums and all three sharing vocal duties continue with tracks of their eponymous first album.

With MGC2 being lined up for release they delivered the fast paced ‘Professional Noise’, led by drummer Andy, which has a real Kaiser Chiefs feel to it, which tonight, was no bad thing. The driving beat of ‘BB22’ with a dirty rock vocal from Austen kept the pace of the set high. Have a look at their video for it. Set in New York, in the shadow of the Empire State Building, it’s a fine momento of their time there.

Point of Me’ had their trademark three part harmonies spot on, and ‘Calling’ rocked out their set. Their fun approach to rock ‘n’ roll will have garnered them a few more fans tonight. Even Kerr Okan of The LaFontaines could be seen peeking out at the side of the stage getting a slice of their set.

And so to The LaFontaines. No strangers to Inverness having played just about every venue in town over the years their return is always welcome. Another three piece, they are an all action bundle of energy from Kerr Okan who commands the audience from centre stage as he surveys the scene in front of him, to the perpetual motion that is guitarist, Darren McCaughey and Jamie Keenan on drums and vocals acting as a perfect foil for Kerr’s rap.

From opener ‘Alpha’ it was clear that this would be energy sapping as Kerr engaged fully with the crowd. The fusion of hip hop and rock may have been a bit of a shock to many who were there but the Motherwell men were well received and it was noticeable that there was a growing appreciation of the band and Kerr’s wade through the crowd only enhanced that as he made his way to the stand which didn’t have, until that point, the best view in the park.

The crowd may not have quite grasped the go down low and jump on Kerr’s command as most were fairly new to it all except the 49 that Kerr counted, tongue in cheek, who had seen them before. If you are going to get an act to get your audience pumped up for the headline quite simply book The LaFontaines.

As the night began to darken the scene was set for the arrival of the Kaiser Chiefs. “Money for Nothing’ pumped out over the PA as the band made their arrival on stage and burst in to new single ‘People Know How To Love One Another’. Unlike the opening acts the focus is very much on one person, Ricky Wilson, who uses all the tools in his locker to connect with the audience.

‘Never Miss A Beat’ and ‘Everything Is Average Nowadays’ followed quickfire but the introduction of tracks from their new album ‘Duck’ did sort of lose sections of the crowd who were maybe expecting a festival type set. The new album is certainly catchy but as yet maybe not familiar enough to many here tonight. Interestingly, around the time that Ricky took off his jacket, there was an air of anticipation as they now meant business. ‘Everyday I Love You Less and Less’ revved it back up again as they headed towards the end with ‘Ruby’, ‘I Predict a Riot’ and ‘The Angry Mob’.

An encore of ‘Pinball Wizard’ and ‘Oh My God’ rounded it off as Ricky launched streamers into the sky from handheld cannons.

Overall The Kaiser Chiefs do what they say on the tin, and Ricky Wilson delivers the sort of experience that you would expect from a seasoned frontman.

The sound though was at times a little muddied which made it difficult to appreciate fully the other band members and at little over an hour and fifteen minutes the set did fall on the short side as some were really just starting to get into it, but it included the hits which is what the majority had paid to see.

Read our recent review with Simon Rix of the Kaiser Chiefs;