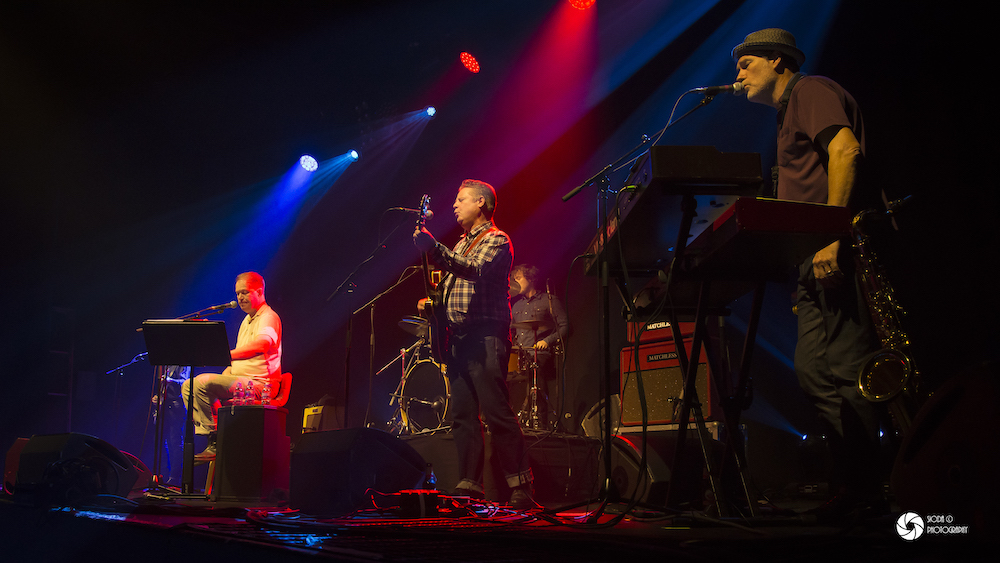 Edwyn Collins , with support from Astrid at The Ironworks, Inverness

Out on tour in support of his tenth studio album ‘Badbea’, Edwyn Collins is proving that there’s plenty of life left in the musician despite his claims that he’s now ‘ancient’ after hitting his milestone 60th birthday. It’s perhaps a bit obvious to point out that he’s something of a medical wonder having survived two strokes and then going on to release a string of critically received albums. But there it is, and that distinctive baritone shows little signs of ageing or faltering as the years have gone on.

Before he comes on, support is provided by Inverness’ own Lional who sound not completely unlike an Orange Juice era version of the main act. Their first, and last for the foreseeable, gig as a five piece with Russell being given a helping hand or two as he recover from injury. Lauren Mackenzie debuted on keys and it will be interesting to see how that changes the band’s dynamic in future.

Second support act Astrid have impressed us on a number of occasions since reforming and their infectious, bubbly indie-rock charms any early attendees not already familiar with their music. Frontmen Willie Campbell and Charlie Clark are clearly having a whale of a time on stage as the revitalised band are look forward to their fourth album ‘Fall Stand Dance’ being released on Friday.

Edwyn Collins perches on his stool for the majority of the gig but there is no doubt that he is complete control of the night, at one point ordering the band to ‘go’ when they’re faffing about to get a song started. He opens with ‘Outsider’ from the new album, a frenetic post-punk gem that defies his claimed ancientness. Despite occasional issues with dysphasia he’s in masterful form and vocally as rich as ever.

Songs from the latest release ‘Badbea’ obviously feature heavily but there are unashamed nods to the past and the set dips in and out of each decade with ease. ‘Rip it Up’ and ‘A Girl Like You’ sound like they haven’t dated a bit and sit neatly alongside his newer material. Son William appears on stage to provide vocals on ‘In Your Eyes’ and it’s a touching moment, the pride is clear in Edwyn’s eyes and it’s more than justified as it quickly becomes apparent that he’s inherited his dad’s gift for a tune.

It’s very much a set full of crowd-pleasers where songs like ‘Don’t Shilly Shally’ and final song ‘Falling and Laughing’ get the biggest cheers. ‘Losing Sleep’, one of the first songs he had released after his illness, is a poignant reminder of what he’s been through with the refrain, ‘I’m losing sleep, I’m losing dignity’ a hint of what he was going through at the time. Despite it all the humour and unerring ear for a tune has stayed strong during all of that and the last three albums have all received considerable critical acclaim.

The thing that really stands out, much like Astrid earlier, is that the whole band are clearly having a blast on stage. There’s plenty of background banter, particularly when Edwyn claims he was a bit flat on one song, or when the drummer finishes a song a verse too early. ‘I think we got away with it, nobody noticed did they?’ he muses, to which the keyboardist remarked that no-one would have noticed if he hadn’t just told them all about it. Standing for the last song, he hammers his walking stick on to the stage in time to the music and with a nod of appreciation he’s off stage and on to the next gig.