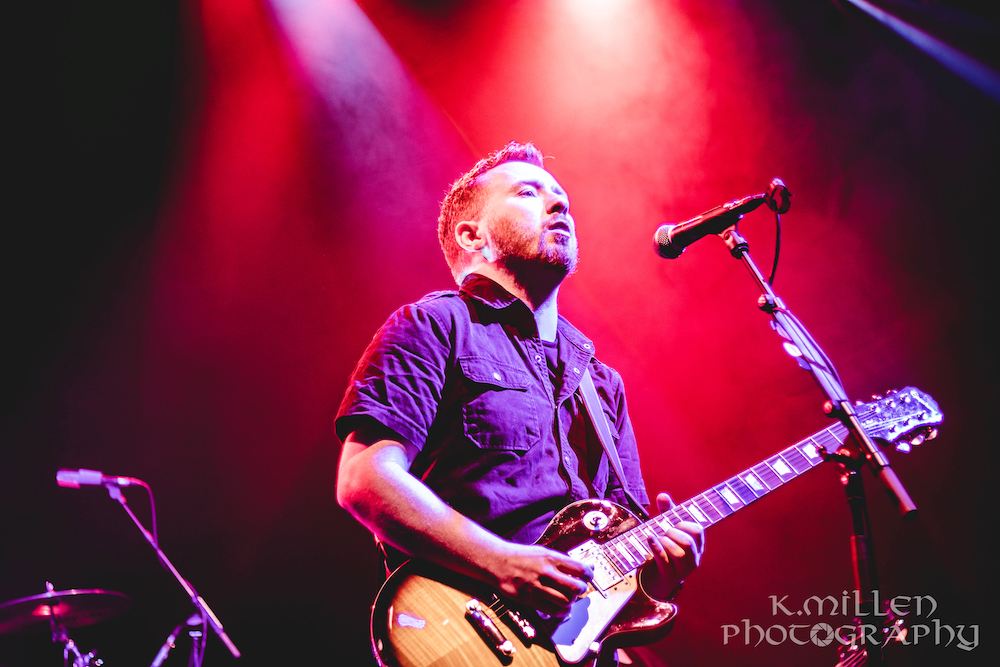 In the build up to their single release at Mad Hatters, Lucille interview one of the support for the evening, Danny Mortimer.

We hope you are well and we would like to take this opportunity to thank you for agreeing to sitting down and talking with us today. We are obviously very aware of each other on a musical level having played numerous shows alongside each other, however we thought this would be a great opportunity to get to know more about you and your music…

Firstly, for any first time Danny Mortimer listeners out there can you please tell us a bit about yourself and your background in music?

I’m a singer/songwriter from Elgin, playing my own brand of Melodic Guitar Based Rock. I picked up the guitar for the first time just after leaving high school and have been playing in bands and playing gigs ever since. Years passed and eventually the idea of trying my hand at writing my own material came about, which led to the formation of Christie Row, and then becoming a Solo Artist.

Since branching out on my own, I have released two solo albums, (with work progressing on the third release) and toured all across the country.  I have been incredibly lucky to play my music at many festivals and venues, including Belladrum, Jocktoberfest, Speyfest, the O2 ABC, the O2 Academy (Glasgow) and the Ironworks.

We are big fans of your song “Maybe This Is Our Day” but what we want to know is, what is your favourite song of yours and why?

Thanks alot – I appreciate that your a big fan of the song.  Its difficult to pick just one if I’m honest, as each song means something different to me. For example, “Maybe This Is Our Day” is an incredibly important song to me and means so much on a personal level. That song in fact, was the first song I had written that I showed to anybody with me playing guitar and singing lead vocals on.

I showed it to my girlfriend at the time, who was very encouraging when I said I wanted to write more and create an album. That is where the basis of the Christie Row album “Headlights at Midnight” came from. Fast forward 6 years later and we are still together and happily married. But now, that song takes on a different meaning as Amy decided she wanted to walk down the aisle on our wedding day to it!!

So I recorded a very special acoustic rendition of the song with my friend Phil, just for her to walk down the aisle too.  So that means alot. Theres loads of little stories like that in my songs which can sometimes make it difficult to identify just one as my favourite. In all honesty from my back catalogue, “Maybe This Is Our Day” probably is the most important song I have for that very reason. If it wasnt for that song, I wouldnt be doing what Im doing now.

Fans of Danny will already know you perform as both an acoustic artist as well as a full band, but which set up do you prefer and why?

Thats a tough one. Both are alot of fun. My background in performing music has always been with a band, so I think my initial response would be to lean towards that. Its my comfort blanket for sure. It shows a closer representation of the type of music I write and record. Plus, I have always considered myself a electric guitarist first and foremost, so getting the opportunity to make alot of noise is always right up my street.  But dont get me wrong, the acoustic shows are a lot of fun, but they can be (sometimes more) nerve racking at the same time.

As its just me and an acoustic, no hiding behind other musicians or other instruments, its just me. I do enjoy the intimacy of acoustic gigs, being able to throw in random songs that I maybe havent played in a while, bounce the set list around a bit.  With the Acoustic gigs, its alot more relaxed. It allows me to interpret my songs differently, extend parts, throw in extra choruses, merge songs together almost off the cuff.

It allows each performance to be unique in its own way, keeping it interesting for myself and an audience who may have seen me perform before. With the band, everyone has to be on the same page and know their parts inside and out. Its alot more structured in a way, with the setlist being made up weeks in advance of the gig, so everybody knows whats going on. Im incredibly lucky enough to have access to a group of musicians that can help take my studio recordings to the bigger stage. And they are all aware that when the band is playing, “Danny Mortimer” isn’t just me, its the full band. So thats a very long-winded answer of saying “no preference”.

Do you sing in the shower? What is your jam?

2019 was a great success for you musically and in your personal life with you getting married but we want to know what was your musical highlight of the last year?

Yeah getting married was definitely the highlight of last year :)

Musical highlight would probably be being offered the opportunity to play the main stage at the Ironworks. Since starting to write and record my own music, that for a long time had been at the top of my list as the one place I hoped to play at. I wouldnt think I would be wrong in saying that for alot of upcoming singers and bands in the local area, that would probably be there goal too.

I also think (for me anyway) it was incredibly important in setting a goal to play at a local venue, as it was a realistic ambition and wasnt totally unabtainable.  Between that and being in the studio recording my next release with Alan Greer of InTime Records. The song that we have recorded, I genuinely feel as though this has allowed me to grow as a musician and improve on my songwriting abilities. Im hoping that this song will surprise alot of people, as the sound is not “stereotypically” me.

Did you set yourself any New Year’s resolutions, and what is the dream for 2020?

I’m hoping to release a few double sided Singles over the course of this year and, after that releasing my third album. I would also love to get back into playing more, get back into the festival circuit and maybe make a return to Belladrum and Jocktoberfest. Having played both before, I would love to come back and play them with the band.

Now for some shameless plugging, we are obviously very hyped to have you playing with us on January 31st as part of our single launch night for “Nothing comes for Free” and thought this would be a great opportunity to ask you some questions about us?

Typical me, your not going to get a straight answer haha!! Maybe this is a little unfair to say as I have only heard this one played on Acoustic by Marc and Lewis, but I do have a fondness for “Tomorrow”. I think the lyrics are a perfect match to Marc’s vocals, the melody is catchy and the guitars work well together. But if I were to say what my favourite (Full Band) Lucille song is, I would have to say its between “Whole Again” and “Borrowed Time”. “Whole Again”  has an absolutely cracking chorus, that I have seen me have stuck in my head on numerous occassions. Plus, its got that great funky guitar/bass intro.

I love “Borrowed Time” too, ever since the first time I heard it, as it was so different to anything I had heard you guys do before (in Neon Knights). It just sounds so big, with the gradual build up and finishing with the awesome guitar solo. For me, it showed (looking for the right word) a more “mature” sound, with a slightly darker tone. I love it – its right up my street and is the type of music I lean towards. I always get a kick out of it when I hear those opening few bars.

We have performed alongside each other on numerous occasions now but do you think there is a benefit to performing regularly with the same group of musicians or is there the worry it could discourage fans in attending shows?

I have always enjoyed sharing a stage with you guys, and yous are well aware of it. I think there is a benefit to performing on the same bill together regularly. Every time we have shared a stage, its always been different, be it with full bands, on acoustics, or a mixture of the two. So I think that that keeps it fresh, both for performer and audience, as its always different.

There’s definitely a comfort in knowing who your performing with too, as we are (myself and Lucille) both at the point now where we know what to expect from each other and theres a genuine friendship there.  Theres also trust there which is good to have, ie borrowing guitars and gear etc ;) As long as the performance from both acts is fresh and engaging to an audience, I wouldnt really see a problem in sharing a stage regularly.

Danny you are only one of a handful of people who have heard our Debut single “Nothing comes for Free” but  we want to know what are your thoughts on the song and what can fans expect?

First of all, thank you for inviting me to be part of the few people you allowed to hear “Nothing Comes for Free”. I loved it! Genuinely!! I have spoken to you guys about the track, and I could tell when listening to it that you had put your everything into this one. It shows and I feel it has paid off.  For me, with this track yous are starting to identify your own “sound” and that sound is definitely “Lucille”.

I genuinely cant wait to hear this song played upon its release, and can see it quickly becoming a highlight in the Lucille set. I can imagine a crowd shouting back at you “Nothing Comes For Free”, and I’m sure Mad Hatters will be the first place that will do it. Thanks so much for inviting me to be part of your night and playing a few numbers. I’m looking forward to hearing your set and getting a chance to check out Chancers again!!

Thank you Danny for your time, as always.