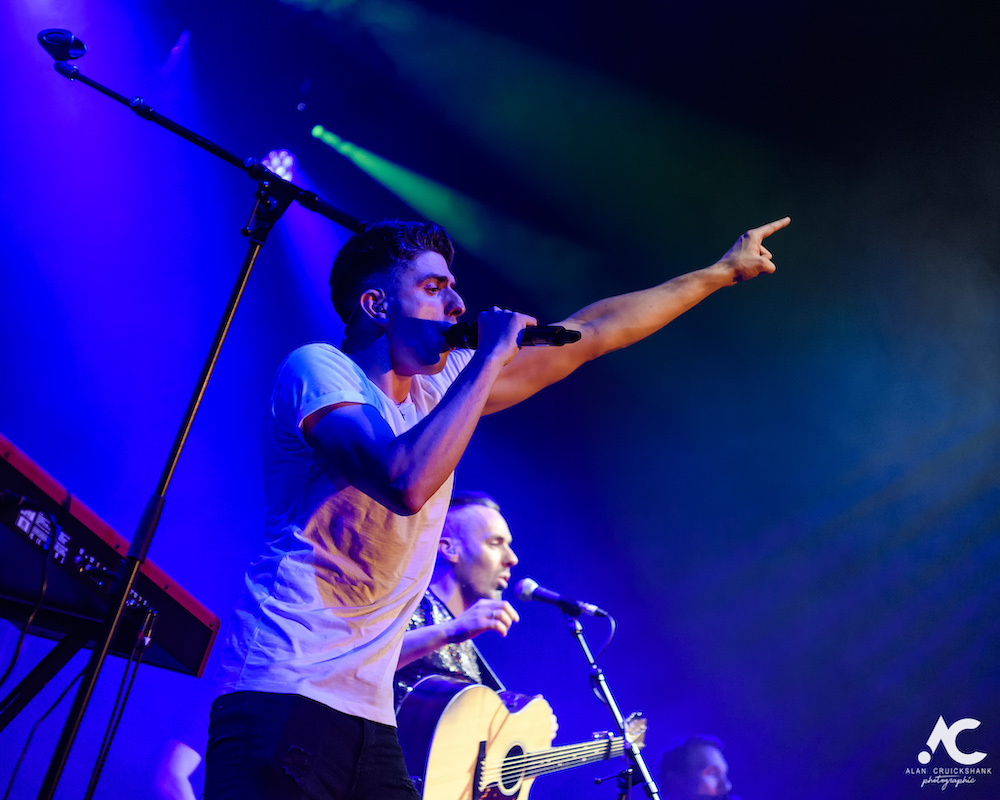 Torridon, with support from Tony Steele and the Massacre, at Ironworks, Inverness.

Steven Barclay a.k.a. The Chosen Lonely was first support for Torridon.
Last time I saw Steven play in 2018 during and I remember thinking at that event that his voice and writing abilities were a little rough around the edges but real possibilities were showing.

Last night showed my judgement to be correct as Steven put on a superb solo show for a crowd that had undoubtedly come to see and party with Torridon. Steven mentioned during his set that he was now based in Glasgow and had went to a local pub to take part in an open mic night when the “Two Kennys” from Torridon came in to the pub and asked him if he was interested in coming to Inverness to support them at the start of the tour. Steven said ,insert swear word here, yeah, and I for one am glad he accepted the invitation.

‘Tenerife’ and ‘Madkat Mary’ were the first two songs up in his set before easing in to a superb Keane cover of ‘Everybody’s Changing’ Steven has really good control of his voice and every song sung sounded effortless. Steven said during his set “felt strange standing on his own on such a big stage; he also mentioned that considering he called himself The Chosen Lonely he should be fine with it”

This was a much more professional and polished performance from the one I saw in 2018 and I’m looking forward to seeing him grow even more, he certainly has the talent and ability to do so. If you are in the Glasgow area on Feb 8th you can catch Steve make his deserved debut at King Tuts Wah Wah Hut.

Next up from Liverpool a superb band, Tony Steele and the Massacre  I’d heard about them, but not actually managed to hear the band before the gig so decided to look them up on Face Book before heading to Ironworks , I highly suggest those reading this that were not at Ironworks to hear them should do likewise and check them out sooner rather than later.

I read on the band’s Face Book page that their bass player, backing vocalist and very good friend of more than twelve years Peter McParland had recently passed away, I figured from reading that sad news that this gig was going to be difficult.When the band were setting up I noticed a card being placed on the stage by Tony, i went over to offer my best to them. Tony was putting the card down as a way of having Peter with them on stage in spirit.

I sensed that this was going to be a difficult gig for them to do, to my ears though…they smashed it, Tony’s graveled voice was superb and suited every song they played, the bands drummer (sorry I did not catch his name) was sublime on harmonies. Lead guitarist Charlie Landsborough Jnr’s skills are superb.

I would describe his playing style along the lines of Lynyrd Skynyrd but a little more musical. There is no doubt there will be some tough times ahead for these guys but I sincerely hope they find a way through this difficult time, I love their sound and Tony’s song writing, their set list is below and the song that stands out particularly is “cold shoulder”.

I wish them all the very best for the future and look forward to seeing them again.

Torridon kicked of 2020 starting their “Break the Chains” tour at Ironwonks Inverness on Saturday night to a packed house.

Every conceivable age of fan was at Ironworks Inverness on Saturday night for the first date of Torridon’s “Break the Chains” tour which takes Torridon to places from Stornaway to Forres and Aberdeen to mention just a few, the tour runs through to June.

As expected, Torridon came on stage to a roar from the crowd who demanded to be entertained in the way only Torridon can and the band did not disappoint, lots of hands in the air, foot stomping, singing along and dancing ensued.

January seemed like the longest month in history and the crowd came out to have a great time which in turn gave Torridon an excellent start to the tour. There were lots of birthday wishes doled out to fans from the band along with banter and nonsense to crowd throughout their set.

The only little blip was a fire alarm going off on one of their last songs of the night “Highland Girl”, everyone was evacuated from the premises whilst the fire brigade investigated, once the all clear was given the crowd were allowed back in and the band came back to play a few more tunes.

All in all a great night had by all and we wish the band all the best for the tour.

See photos of Torridon at The Gathering 2019;