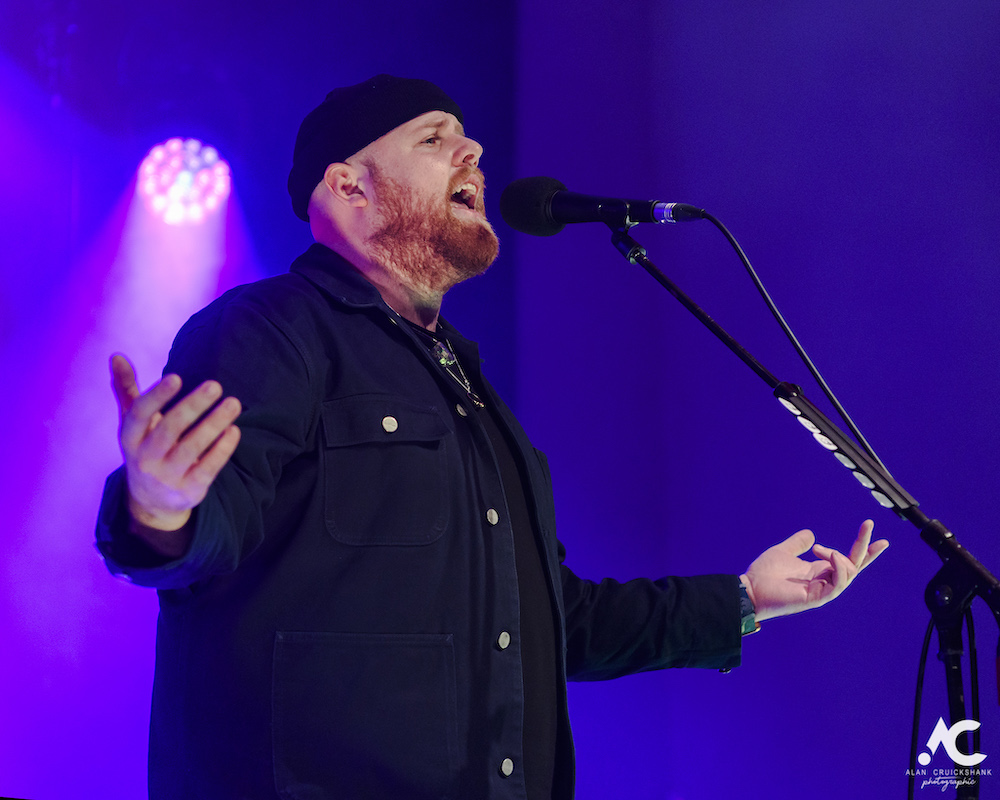 Tom Walker, with support from Gordon James and The Power and Keir Gibson, at Strathpeffer Pavilion.

First support act of the night was Gordon James and Kenna Ross from (Gordon James and the Power). First support slot is often a difficult slot to play and I always have huge admiration for the artists that are willing to take this slot, the reason I say this is that slot means the artist often has to endure a lack lustre audience who are not in to their stride yet and are often modest in number, however Gordon and

Kenna had to endure an extra issue that was seen in this same venue before when Jake Bugg played…a loud talkative distracting crowd particularly at the back of the room, I’m not sure what it is with this venue?

I was left wondering if it’s just the particular acoustics of this hall that allows chatter to resonate right to the front, not sure but it did not put Gordon and Kenna off putting on a great performance as they always do, the 300 odd crowd at the front of the stage certainly showed their appreciation for them both and I am so glad they did, both Gordon and Kenna are superb artists that I have seen many times and look forward to seeing again.

I do wish though, that people would show a little more respect and attention to artists that work really hard writing and performing original material, lets encourage not discourage such artists.

Second support act for the night hailing from Fort William was Kier Gibson.Kier is a well-known artist around here who has played in venues such the O2 Academy in Liverpool as well as Edinburgh Hogmanay and Belladrum to mention only a few.

Kier sadly suffered the same issue as Gordon and Kenna did but continued on regardless and also won over the accumulating crowd at the front of the hall, the said crowd were easily won over with songs such as “Something, Fall too fast and Eyes wide” before finishing their set with the excellent “Hollow”.

Kier has lots of gigs coming up this year including (Made in Pitlochry in March, also 10 by the Ben in April and Live at Leeds festival in May, if you get the chance to check Kier out then I suggest you do.

Tom Walker came to the Strathpeffer Pavilion (StrathPPeper) as Tom admits to have been calling it all day, for the second date of his “Home Run” acoustic tour in Scotland which started in Aberdeen and concludes at The Cave Edinburgh on the 12thfeb.

The Scottish born and Manchester bred singer/songwriter took to the Pavilion stage with a large glass of red wine in hand to shrills and cheers from an eager local crowd that managed to buy all 600 tickets in just Seven minutes when this gig was announced.

Bedecked in his trademark black beanie hat Tom started his set with the beautiful soulful track “Angels” taken from his No 1 debut album from early 2019 “What A Time To Be Alive” The crowd immediately get in to the set by showing their intent to join in singing at every opportunity, and no wonder, Tom has a wonderful Blues/Soul voice that resonates across the pavilion hall beautifully, his next Three songs “Cry out, Fade away and Better half of me” really showed his lyrical strength and prowess and boy do the crowd love it!

As expected the superb “Just You and I” resulted in what looked like several hundred mobile phones appearing above people’s heads and the first big song along of the night giving Tom a backing track he seemed to appreciate. The next two tracks “Wait for you & Home town glory” were the stand out songs for me and demonstrated the feelings Tom puts in to his music.

Just after “Heartbeats” Tom told the crowd that it was pianist Pete’s (I think that was his name) birthday and a birthday cake was duly brought on stage by the guitar tech for Pete who looked a little surprised to say the least, after Tom and the crowd sang “Happy Birthday” to Pete it was time to settle down for the final two songs of the evening.

With just a key board for accompaniment Tom went in to “Not Giving In” with great gusto which was hugely appreciated by the crowd whom were determined to have their voices heard.

Before the final song Tom mentioned that he does not do the false encore thing so this really was the last song and as anticipated said final song was “Leave a light on” which again resulted in several hundreds of mobile phones being  lofted above heads and enthusiastic singing from the crowd.

As the end of the final song Tom did exactly what he said he would do…he left much to the confusion of the crowd, however the crowd left having witnessed a master of his craft at work. It’s difficult for me to put Tom Walker in a genre box, his voice and song writing lends itself to blues, soul and maybe even reggae and pop.

He really does have wide spread appeal, he has had a phenomenal 2019 and I for one wish him all the very best and success for 2020 and beyond. Thanks for visiting us Tom, it was much appreciated.

We caught a few photos of the crowd at the gig you can see them on our Facebook page.