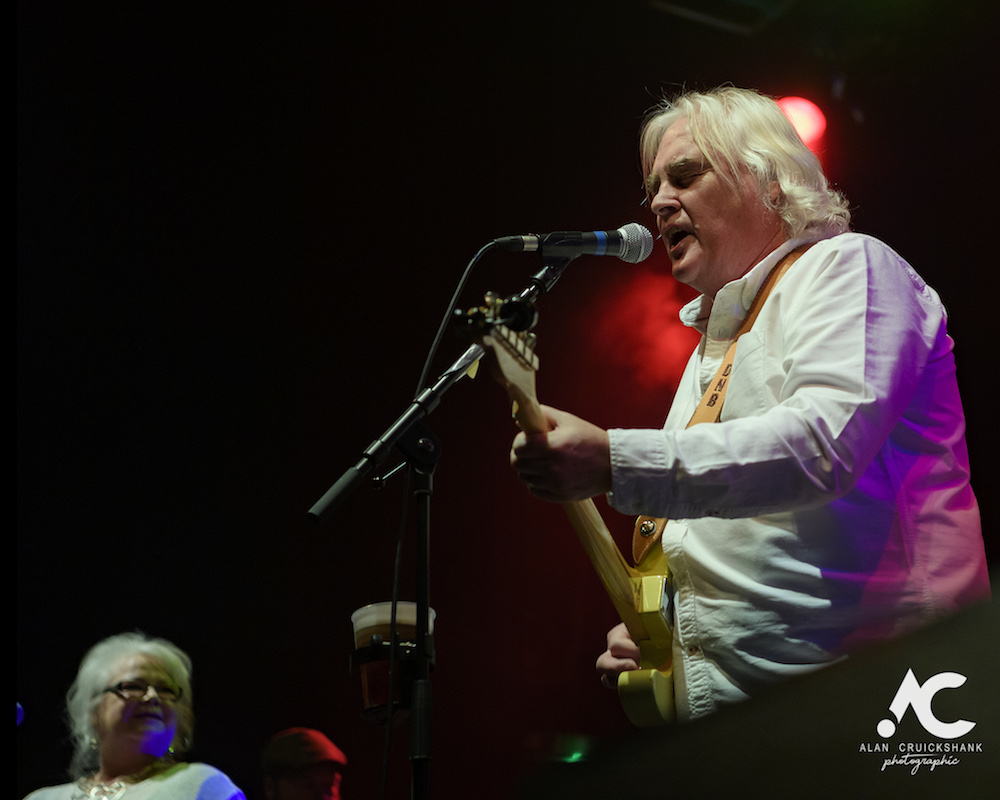 We take a listen to Dougie Burns’ new album ‘Martha’.

The album is a warm mix of songs that have a real sense of a family gathering, a celebration you could say. It’s a warmth that lasts throughout the album. We took the opportunity to catch up with Dougie and get a bit of background to the album.

The album sleeve notes reference family, especially in the title ‘Martha’ his connection with his mum. Dougie recalls his early family related music memories and how these have shaped the songs in the album.

Dougie explains ‘The title song Martha was really my starting point for this album. I didn’t realise till my daughter Sarah was going out on the town and not coming home till late just how my mum was worried about me and would always stay awake till I got home and told her I was in. I’d resent it but know now just what was really happening.

It’s also a song about being home and the realisation that for me at least “home” will always really be where I grew up . It’s not that I don’t feel welcome in the Highlands, I do, it’s just that where I grew up is where my deep seated memories are. Irony is both my parents are long gone and that place of memory doesn’t exist anymore.’

In terms of the inspiration at an early age Dougie draws on his father’s influence. ‘My Dad was a character and it was he who instigated my love of music . He was a saxophone player in a swing/dance band when I was born. It was a hobby not professional. He was into Jazz and Blues but was happy to indulge my brothers and I’s tastes and did like a vast selection of music and bands . Aged nearly 70 I took him to Belladrum and one of his favourite bands of the weekend was Biffy Clyro. Anyway, whenever something or someone displeased him his catchphrase was that they were “ Happy Amateurs“. That’s where that song came from.’ Dougie did note that there was a similarity between him and his father. ‘Just after he died I was at the family house and one of his neighbours got a fright thinking I was him coming and going to the car because I look so much like him!’

Dougie has brought a number of new songs to the party along with some back catalogue. He expands on this. ‘There’s 11 songs on the album. 7 of which are new or newish. The remainder are older songs I wanted to give a bigger production to, as with the BLUEBELLY (my old duo) songs ‘Cry Cry Cry’, ‘Coffee’, and ‘Shrine’ written years ago when they were just recorded in one take with guitar or guitar and Double Bass. I also felt The Mad Hat song, I previously released with my band the Cadillacs, would lend itself to a kind of Rolling Stones vibe and so we tried it out. I think it worked.’

For Dougie the song that gives him a particular satisfaction is ‘Take My Hand’. Dougie gave his reasons ‘Not so much because I think it’s the best song on the album but it is the only time my younger brother Campbell and I have ever recorded anything. He’s been playing lead guitar and some writing for Glasgow band “Trident” for about 35 years or more and I’ve been playing about as long . Somehow we’ve never managed a collaboration. Well now we have and I’m happy about that.’

All the songs are self penned by Dougie with the exception of ‘Arms of our Father’ to which he gave us the background. ‘In 2015/16 I went to a songwriting retreat in Moniack Mhor which was hosted by Boo Hewerdine and Darden Smith . Boo writes and performs with Eddi Reader, and Darden is a singer/songwriter in Nashville and Texas. During the week assignments were passed round and Francesca Murphy a singer from Wales and I were tasked with putting music to lyrics by Peter Kirkbride, a musician from Dorset which we did.

Boo joined us with an idea for the chorus and the finished song was born. When Davy and I were thinking about the arrangements I heard this song as a sort of Gospel thing. The lyrics are about a funeral so it seemed apt. Through my Velocity Café night I’d met the female choral group “The Broads“ and I asked if they’d be interested and they jumped at it. Davy and I went to one of their houses and recorded all that beautiful vocal background.’

As well as ‘The Broads’ Dougie has brought together a range of other musicians to pull the album together from the sleeve notes. Dougie gave a bit of detail on that process ‘The basic album was all recorded by Davy Cowan and I with my vocals, guitars, bass and sequencing. We then got Martin Stephenson’s guy Malcolm MacMaster to put pedal steel on three songs which gave a right country flavour. Brother Campbell did his bit and Martin did the magnificent slide guitar on Mad Hats. We just sent them all rough tracks online and they did their bits and sent it back to Davy who did a brilliant job of piecing it all together.

Lastly I asked Raymond Johnston to put some cowbell on it too. He came into Davy’s studio for a day and we had a lot of fun with that. Unfortunately Raymond passed away shortly after that so I’ve dedicated that song to him.’

As mentioned at the start It is clear from listening to the album that there is a real feel of family and friends. Dougie set out his philosophy on this. ‘I am firmly of the opinion that music and songs are entertainment and listening and performances should above all considerations be fun. I love interacting with audiences and I get a kick out of having great musicians join me to embellish my songs. It’s the same approach I took with my first solo album California Cadillac and I did it again.

In Velocity Café where I’ve been hosting monthly music nights for about 6 years I have invited artists of all ages and styles to be involved and it’s become quite a successful and enjoyable experience.’

Dougie worked closely with Davy Cowan in producing the album. Dougie explained the interaction between each other. ‘Davy and I were due to go to Texas in spring 2019 and for reasons beyond our control (visas and stuff too annoying to go into again) we weren’t able to go. We had already paid for going to Heathrow before we flew out so we went to London anyway for a blow out and to get over the disappointment. There in London we came up with the idea of recording this album. We didn’t really know each other well till that London trip but we hit it off and found that despite our differing music styles we actually had pretty similar tastes and reference points to talk about music and where we wanted to take the sound of this album.’

A lockdown is probably not the best time to release an album, but there are plans for the future which Dougie expands on. ‘Davy recorded his own solo album at the same time and we planned to release them both together in a double bill concert with guests in One Touch at Eden Court. This was booked for 28th April and tickets were selling well when the lockdown happened which was a crushing blow really and quite costly. We had committed money to printing flyers and posters etc.

Anyway not to be deterred we have rescheduled this concert to Friday 12th February 2021 and hopefully we will triumph that night . Meantime in lockdown I’ve done a few little Facebook Live gigs and I’m also hosting an online Velocity Café Open night on Thursday nights. There’s an open Facebook group for anyone to tune in.

To round it off Dougie put the following out there. ‘I’m releasing the album through Birnam.com despite all the current problems and will be advertising it as much as I can during lockdown. People can get it through Dougie for a tenner or through his website.